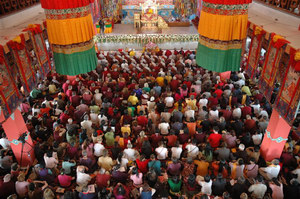 His Holiness gives the Green Tara empowerment to a crowded assembly in Tergar Monastery in Bodhgaya on December 22, 2006

In the evening 21st December, His Holiness performed the initial preparation puja for the Chakrasambhava preliminary Empowerment at Tergar Monastery in Bodh Gaya. The Chakrasambhava Formal Empowerment was transmitted on 22nd December. Recipients included Mingyur Rinpoche, Khenchen Tsultrim Gyamtso Rinpoche and Tenga Rinpoche and Venerable Hai Ta Fa Su from Taiwan, who also received the Vajrayana Crown from His Holiness.

More than 2000 international devotees gathered from western countries and eastern countries. In the afternoon, His Holiness gave a public Green Tara Empowerment on the request of visitors from Korea.

On 23rd December, His Holiness began teaching on the Four Extraordinary Preliminary Practices. Afterwards, His Holiness gave refuge to all the devotees. Later in the evening , at the request of His Holiness, Mingyur Rinpoche gave additional detailed teachings (Tib. kyar tri) on the same text. His Holiness teachings are sponsored and organized by Hwa Yue Foundation of Taiwan. – Tashi Paljor