The Gyalwang Karmapa on the Relationship Between Buddhism and Science 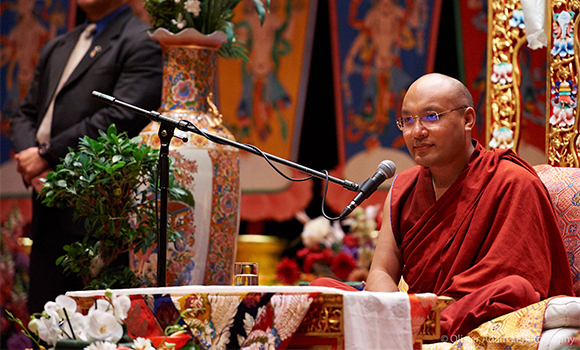 May 22, 2106 -Geneva, Switzerland
The Gyalwang Karmapa began this afternoon by referring to His Holiness the Dalai Lama’s division of Buddhism into three categories: Buddhism as a science, as a philosophy, and as a religion. When we speak of Buddhism as a science, the Karmapa said, we are considering how it examines exterior phenomena through a process of deduction. The philosophical side refers to the various schools and their views, while the religious aspect includes the meditative and ritual practices, the inner focusing that is special to Buddhism.

If we look at the life of Shakyamuni Buddha, the Karmapa continued, we can see these aspects in play. The Buddha was a prince who lived a long time ago, and following the traditions of that era, he received the best possible education in both religion and the science of the day so that he could guide the kingdom.

The king was worried about the prince, however. In accord with the royal traditions of India, when the prince was born, the king had called in a Brahmin seer who prophesied that the child would either become a powerful ruler in the world or a renunciate with high realization. The father had no desire for his son to become an ascetic and did all he could to turn his mind toward the things of this world. The king filled the palace with pleasant entertainments and found a queen for the future king so that he would only think about what was within the palace.

Finally, the prince was able to pass beyond the walls, and so he witnessed suffering, sickness, old age, and death. These are things we see often, but for the prince it was new, perhaps shocking, and made a deep impression; he was motivated to leave the palace and follow a spiritual path. The prince asked himself the basic questions that religion attends to: What is the essence of this life? What should I do with this time on earth? He was inquiring and analyzing, searching for reasons and for certainty. He followed this process to its end and became Buddha.

There are many different religions, the Karmapa noted, and they started out with a strong spiritual focus. “Over time, however, they turned into a tradition based on customs,” he remarked, “and people just entered into these systems and believed with thinking much about it.” Such a religion is not so beneficial, he stated, and does not transform our minds in the way it could.

“Today it is important that we find a harmonious relationship between science and religion,” the Karmapa stated, “one in which there is mutual understanding and support, so that the two can balance each other.” One way to understand this relationship is to consider the focus of these two approaches, he said: the scientific way turns outward to look at the exterior world, whereas the spiritual path turns inward to look at the interior world of the mind. Science can give us information about the outer world but with this alone, it is difficult to find one’s true nature and to discover the meaning of this life.
Religion, however, can bring meaning and profundity into our lives, and show us the right direction to take.

It seems, the Karmapa noted, that the more technology develops, the more our minds become distracted and unstable. Religion, however, is like our eyes: through it we can see into the deeper, more essential meaning of this life and into what we should be doing. This is the main point. In sum, religion gives meaning and depth to our life and science allows us to understand the concrete world and to accomplish activity there, so they complement each other.

The Karmapa then answered a series of questions.

The first question asked, “What is impermanence?” The Karmapa replied that most people think of impermanence as something negative and would rather not think about it. However, if we reflect for a moment, he said, we can see that it gives us new opportunities. Everything that is born must die, and this process of each instant arising and disappearing, continually affords us new opportunities. The situation of the morning is not the situation of the evening, and this gives us another chance. Thinking about change in a positive way like this can inspire us.

If we accept birth, the Karmapa remarked, then we must also accept death as a natural process. He suggested working with impermanence by imagining that one day is a whole life; we are born in the morning and die in the evening, he commented. This way we can gradually become familiar with the fact of death and come to accept it as part of life.

The second question queried the relationship between compassion and science.
The Karmapa responded that compassion is something innate; affection is natural to us, but its development depends on our surroundings. For example, we all have the ability to speak a language, but if a child grows up in the forest with no human beings around, this capacity will not manifest. Similarly, if parents speak often of compassion and it forms a part of a child’s surroundings, the child will become familiar with it and compassion will develop. Compassion, therefore, is both innate and a quality that can change and increase.

What blocks the development of compassion, he remarked, is ego fixation, which is like a wall that imprisons us. We need to break down this wall and let our compassion become boundless, so we lose a sense of difference between us as the subject and the object of our compassion. Understanding compassion in this way, if we can combine science and Buddhism, developing a compassionate motivation while involved in scientific pursuits, this will create a better future for everyone.

The third questioner asked, What are the benefits of the practice of sending and receiving (tonglen)? The Karmapa replied that this practice comes from the Kadampa tradition and that it provides two ways to develop bodhicitta (the wish to attain enlightenment for the sake of all living beings): the first way sees the self and other as equal and the second exchanges self for other. In order to practice the second type, we need a very powerful love for others.

Some are afraid to do this practice, he commented, because they do not understand that it is a conceptual training; we are not actually taking on the suffering of others and giving them our happiness, but training ourselves mentally so that when the occasion arises, we will be ready to help naturally and spontaneously. This training, therefore, is a preparation, a way of developing our love and affection. This in itself, of course, is not enough. The Karmapa counseled that we must then actually apply the training to the situations we meet in this life.

The next question asked about how to encourage people to become vegetarian. The Karmapa replied that we have to think about the reasons for doing so. For him the main reason was considering the suffering of animals. They to not have the language to tell us what they go through, but in thinking of our own bodies, we can sense what their suffering might be and this is reason enough to give up eating meat. We can begin by gradually reducing the meat we eat and finally giving it up all together.

What about donating our organs after we die? asked the next questioner. The Karmapa responded that in Tibet, there is the practice of Cho, or Cutting Through, in which one visualizes one’s body as an offering to others. When people die, their corpse, no longer needed, is offered to vultures and thereby benefits others. It is true that there is the tradition of not moving a body for a certain time after someone dies, but if beforehand we have the motivation to benefit others by giving our organs, and if our mind is spacious as well, then we can make this offering.

The Karmapa then combined several questions dealing with the relationship between different religious traditions within a single family. He counseled that it is not helpful for one person to try and force their beliefs on another. This creates conflict, and harmonious relationships are very important. If we seek commonalities and a shared happiness, then change can happen. Sometimes we are too attached to our own religion. Of course, these traditions are important, but their goal of happiness and harmony is the most important.

The Karmapa closed the weekend of teachings by saying that when he was young, he had a dream of coming to Switzerland and that it how has been realized. He also expressed his heartfelt gratitude to the Swiss people for receiving the Tibetans into their country and taking care of them.