How Do Ethics Apply to the Practice of Medicine? The Karmapa Dialogues with Students 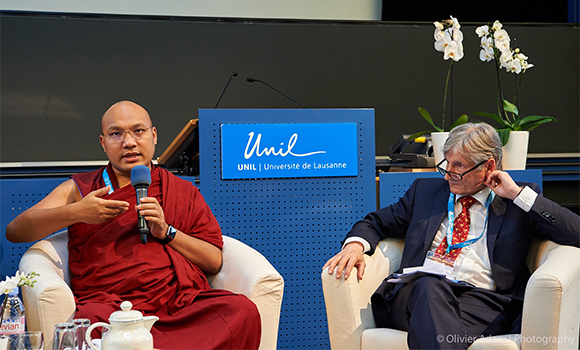 May 23, 2016 -Lausanne, Switzerland
As on his previous tours, the Karmapa is reaching out to the younger generation, this time with a visit to the University of Lausanne. In a large amphitheater, a lively dialogue took place between the Karmapa and over 200 first year medical students. The event was part of their course on ethics and medicine and included giving the students a question, which they discussed with their neighbors. After they were invited to give an answer over a mike, and finally the Karmapa was asked for his thoughts.

The first question queried, what does it mean to be in good health? One student responded that it means to be well in physical, socio-cultural, and mental terms. Another student added in spirituality and another said it meant to be well in terms of one’s perception of oneself.

Impressed by their answers, the Karmapa noted that the students were young but their answers were profound and wide-ranging. For his position on the subject, the Karmapa began by mentioning the importance of a good balance between the exterior physical world and the interior, spiritual world.

Further, he remarked that we might not be sick physically, but we could be suffering from the disease of what are known as the three poisons⎯anger, attachment, and ignorance. When anger arises in our mind, for example, we will not feel well, so this is considered a sickness that brings suffering. The Karmapa also mentioned the importance of finding another type of balance between a shared common sense and an individual’s perception.

The second question had two aspects: What is suffering? What is happiness?
Most of the students replied that suffering is mainly physical pain, but it can also be psychological. They made a distinction between short-term pain and longer-term suffering. Some questioned if suffering could be a positive thing and others thought not.

The Karmapa commented that suffering is a broader term since we all suffer in getting what we do not want, and in not getting what we do want. We also suffer when we lose our independence by coming under the influence of our emotional afflictions. Turning to the relationship of happiness and suffering, the Karmapa said that we could also ask ourselves if the happiness we experience is real. By investigating, we can see that our sense of happiness comes about in relation to suffering: the two are established in dependence one on the other and, therefore, ultimately not real. What we usually consider happiness is a diminishing of suffering. We should look, he counseled, at the moment between the subsiding of suffering and the arising of happiness. What is there?

Usually Buddhism speaks of three types of suffering, he explained. (1) The usual feeling of suffering as we know it; (2) the suffering of change, the fact that since the happiness we know is not ultimate, it does not last, but turns into suffering again; (3) and finally, all-pervasive suffering that comes from coming under the power of something or someone else.

The next question asked what does it mean to take care of someone? The students responded that it means to bring them back into health, to understand how they see things, to do this from a place of happiness within ourselves, and bring them to what they desire or help them to accept what cannot be changed.

The Karmapa responded that people come to him with many different kinds of problems, which are not always spiritual, and he seeks to give them hope and as much help as he can. The most important aspect of caring, he explained, is not a medical intervention, but our motivation, the compassionate wish to understand another’s suffering and then doing what we can to free them of it. When our empathy or compassion is powerful, he commented, we have a greater ability to help others.

Sometimes when they cannot be cured, he commented, our simple presence is important so that they do not feel alone in the world. We stay involved with them so they do not lose their confidence. The more we help others, the more able we become to benefit them. The Karmapa also mentioned that it is important to take care of oneself as well as others; the two are mutually dependent.

The next question was about assisted suicide. If you are a doctor, what do? A lively discussion followed in which students gave a variety of opinions. Some felt if someone is mentally stable and suffering a great deal, we should let them decide. Others felt that because of suffering, they might not be clear minded, and so we should not leave the decision to the patient; the wish to die could be a phase, so one should listen to them and help them make the best of the life they have left.

The Karmapa explained the in general, suicide is not positive, so we have to consider the entire situation and help the person find an inner balance. We should support and care for them as much as we can and not let go of them even if the prognosis is dire. It is also true that people’s tolerance for pain is different and some can continue to live with a great deal of pain. The main point is to support them as much as we can.

After a short break, professors from the university joined in the discussion, and the first question was how do we perceive death? Almost all the answers agreed that what is frightening is not knowing what comes after this life. We fear the unknown. The Karmapa responded that death is part of a natural process, which we accept. If we are born, certainly we will die. When we are young, however, we do not think about death, so we are not accustomed to this thought, he explained. In Buddhism, we reflect on death, which helps us to know what is important and to make our life meaningful. Suppose we only have three months to live. What would we do? We can also imagine that one day is a whole life: we are born in the morning and at night we will die. The next day, we are born again and the process continues.

One person who works with the dying asked for advice on the moment of death. The Karmapa remarked that this is one aspect of Buddhist practice that is difficult to research scientifically because we do not know when a lama will die, and once they have passed away, their consciousness is not present to be examined. However, there is a similarity between the process of dying, he explained, and what is known as deep sleep, so we can train ourselves through the practices related to this particular state of sleep, which will help us at the time of dying.

The Karmapa was asked if he often thought of his own death. He replied that he thinks about it in the evening, when the sun has gone down. He does not fear death, he said but is concerned to make this life meaningful, to accomplish what he wants to do. In general, if one has lived well, dying is not heavy but “light.”

Is there a good way to die? was the next question. The answers included to die in one’s sleep and to die free of mental suffering. The Karmapa replied that in Buddhism, dying suddenly in an accident for example, or dying in one’s sleep were not the best ways to pass away because at this time, a clear mental state is the most important thing. It is a time when we bring our practice to mind, so if we die while sleeping or suddenly, there is no time to prepare for this crucial event. If we step back and look at the situation from a long-term perspective, death is a transition, and we should use this opportunity as best we can.

The following question asked the Karmapa directly how to deal with doubt. He answered that people often come to him with questions about their health and what to do. Have an operation? Take this medicine? Go to that doctor? Since he is not a doctor, he sometimes has doubts so he relies on a divination. Further, he remarked that if we think too much, our doubts will just grow, so it is best to let the mind rest in its natural state and respond from there.

The next question was about the link between spirituality and ethics. The Karmapa answered that in the beginning, all religions were spiritual, and then over time they devolved into a system of customs, forgetting the key spiritual questions of how we exist and what our true nature is. Usually, we think of ourselves as independent entities, he noted, but we actually exist in interdependence on others, whether it is the food we eat, the clothes we wear, or the air we breathe. If we look into it, actually, there is not a big difference between ourselves and others; in fact, we are a part of each other, and so we are moved to take responsibility and care for others. We begin, the Karmapa counseled, by coming to know ourselves and through this, we know others. First we take responsibility for our lives and then we can help another.

And finally the Karmapa was a requested to give his advice on how to live a better life.
He commented that in the twenty-first century, people have become preoccupied with material things and this restricts our freedom. We should investigate to discover the limits of the material world and how we have lost our freedom. Further, our desires are limitless but the material resources to fulfill them are limited, so for this reason as well, we need to control our greed.

In the final count, he commented, our happiness does not come from material things; happiness is something rather simple that we find within. If we can practice meditation on our breath, paying attention to it as it comes and goes, we can learn to relax and find a deeper joy and contentment.

On this positive note, the afternoon’s discussion came to an end. The Vice-Rector of Lausanne University, Philippe Mareillon, thanked the Karmapa for coming and offered him a musical box turned by hand, a famous craft of Switzerland and lovely souvenir of his visit.