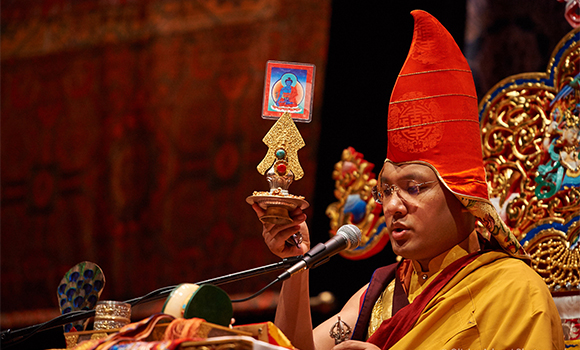 22nd May 2016 -Geneva, Switzerland
The Medicine Buddha tradition was brought to Tibet from India in the 8th century by the great Indian Buddhist master, the abbot Shantarakshita of Nalanda (725–788), who gave the teachings to the Tibetan king Trisong Deutsen. The abbot’s aim was to increase the welfare of Tibet: to improve health, prevent disease, give protection against black magic, and protect the ecological system from natural disasters.

Today, the Geneva Theatre next to its famous lake was filled with people eager to receive the empowerment. To the right and above His Holiness’ throne, a huge thangka depicted the Medicine Buddha, who embodies the healing energy of all enlightened beings. He is a dark blue, the colour of lapis lazuli, and wears monastic robes while sitting on a lion throne. In his left hand he holds a begging bowl containing an arura fruit, which Ayurvedic physicians considered suitable for treating all illnesses. In his right hand he holds a sprig from an arura tree. To this day the plant is used in Tibetan, Chinese, and other herbal medicines.

The ceremony began promptly on the arrival of the Gyalwang Karmapa. The Short Vajradhara Lineage Prayer along with preliminary prayers were followed by the offerings of body, speech, and mind for the long life of the Karmapa, given by Namkha Rinpoche and members of the Rigzin community.
In a short introduction to the empowerment, the Gyalwang Karmapa explained that he would be giving a blessing empowerment, which allows the teacher and disciples to make an auspicious connection and for them to receive a blessing, which the Karmapa said he hoped would bring a little bit of benefit.

His Holiness then spoke briefly about the Tibetan science of healing. Often people think of the Medicine Buddha in terms of relieving sickness or prolonging life, he said, but these do not represent the profound aspect of the practice. In the Tibetan tradition, illness is not thought of in terms of a solid material phenomenon such as a virus; rather disease is seen as the result of an imbalance in the body between the four elements. In this way, sickness is understood as an interdependently arisen event. Although it may be possible to identify an immediate cause for a specific illness, the root cause of all illness is considered to be the three poisons, ignorance, attachment, and aversion.

Emphasising the close connection between well-being of body and well-being of mind, His Holiness pointed out how mental stress and pressure can have an adverse effect on our physical health. Having a positive mind helps our physical well-being. He suggested that meditation techniques, such focusing on the breath, which he had taught the previous day, are very effective in reducing stress, relaxing the mind, and, consequently, bringing about improved health.