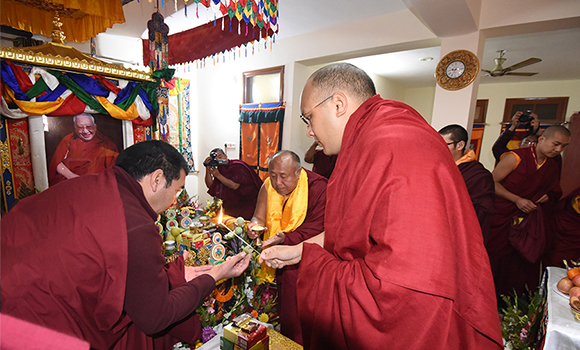 January 6, 2106 -Bodhgaya, Bihar, India
At the invitation of the Thupten Dorjedrak Aeam Chogar Chokhor Namgyal Ling Buddhist Institute, His Holiness the Gyalwang Karmapa came to the Nyigma Vajrakilaya Buddhist Temple this morning to pay his respects to the Kudung of Kyabje Taklung Tsetrul Rinpoche, who passed away in Bodhgaya on December 23, 2015.  Supreme Head of the ngagyur Nyingma tradition, Taklung Tsetrul Rinpoche belonged to its northern terma lineage and founded the monastery of Thupten Dorje Drak near Shimla. He also had a close connection to the 16th Karmapa Rigpe Dorje, from whom he received the cycles of teachings and empowerments known as the Treasury of Oral Instructions and the Treasury of Kagyu Mantras.

His Holiness 17th the Karmapa was welcomed today by the head Khenpo of Thupten Dorje Drak Monastery, who accompanied him to the place of the Kudung. Here, as tokens of his respect, the Karmapa lit a butter lamp and offered a kata. While seated on a throne facing the Kudung, the Karmapa chanted the Samantabhadra Prayer and made aspirations for the swift rebirth of Kyabje Taklung Tsetrul Rinpoche. Before leaving, the Karmapa also consecrated a stupa of the Vajrakilaya mandala on the monastery’s grounds.