The Gyalwang Karmapa Begins His Winter Activity in Bodhgaya 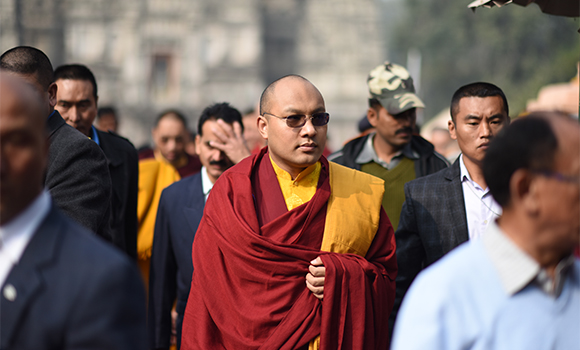 January 1, 2016 – Bodhgaya,Bihar.
His Holiness left Tergar Monastery in the early morning to begin the western New Year by offering his homage at the Mahabodhi Temple, marking the place where the Buddha attained full awakening. The Gyalwang Karmapa was welcomed to the sacred site by Mr. N.T. Dorje, Secretary of the Bodhgaya Temple Management Committee, and the Head Monk-in-Charge the Venerable Bande.

The Gyalwang Karmapa passed under the first gate, covered in beautiful flowers, and descended the long steps on the path to the main temple. Along both sides stood disciples holding white offering scarves and colorful blossoms to brighten his passage and receive his blessing. Once inside the shrine, His Holiness offered to the radiant Buddha statue, golden robes along with heaping bowls of fruit and generous arrangements of flowers. After three prostrations, the Gyalwang Karmapa began the prayers in praise of the Buddha:

Through compassion and skill you took birth in the Shakya family.
As no one else could, you conquered the host of maras.
Your physical presence, radiant like a mountain of gold,
I bow to you, King of the Shakyas.

These verses were followed by prayers for peace and well-being to spread throughout the world and into the hearts of all living beings.

Earlier, the Gyalwang Karmapa departed from New Delhi on December 22th and arrived in the afternoon at Tergar Monastery in Bodhgaya, his residence during the winter months. This year was a special occasion as Yongey Mingyur Rinpoche, who has been on solitary retreat in the Himalayas for four years, was there at the gate to welcome His Holiness. The reception was accompanied by a traditional golden procession of colorful banners and resonant drums and horns. Crowds of ordained and lay disciples filled the area, delighted to see the Gyalwang Karmapa again as they held out their flowing white scarves.

Tergar Monastery is also the site of the yearly Akshobhya retreat, which started on December 24th and will last for forty days. Following the wishes of His Holiness, this special retreat, focused on the phase of approach, takes place in Bodhgaya as part of Kagyu Monlam Chenmo. This year thirty-six participants have come from all over the world and include monks and nuns as well as female and male lay disciples. For preliminaries of the practice, the Gyalwang Karmapa bestowed the empowerment of Akshobhya in the morning and in the afternoon, gave commentary on the practice along with his guidance and advice. As it will throughout the retreat, the daily practice began at 6am and finished at 8:30pm, encompassing six individual sessions. Continuing to give his counsel, the Gyalwang Karmapa will lead the retreat, and afterward perform the ritual of the fire puja related to Akshobhya.

While present in Bodhgaya, His Holiness will preside over two months’ of activities, which begin with the Arya Kshema Winter Dharma Gathering for nuns, taking place from January 12, 2016 to February 3, 2016. As a prelude to the Tibetan New Year, the Four-Armed Mahakala Torma Offering ritual will be performed from February 4 to 7, 2016. Celebrations for the Tibetan Year of the Male Fire Monkey will be held from February 9 to 11, 2016.