The Gyalwang Karmapa Imparts the Essence of Milarepa’s Life Story 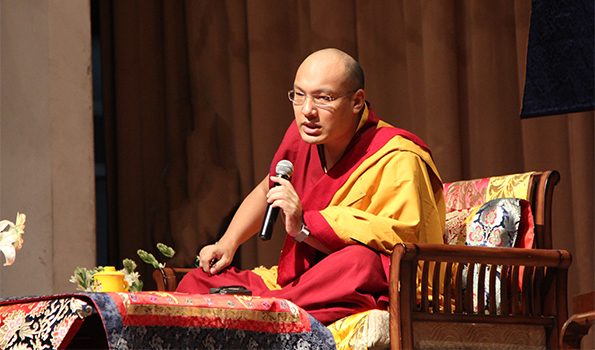 April 4, 2014 – New Delhi, India
The International Buddhist Confederation invited the Gyalwang Karmapa to give a day of teachings on Milarepa, the great Tibetan yogi, in the lovely and intimate theater of the Sri Sathya Sai International Center. On the stage, a painting of Milarepa hung behind the Karmapa’s chair, flanked by bouquets of lush white flowers. After a welcome by Lochen Tulku, the well-known Buddhist singer, Vidya Rao, sang the Heart Sutra in Sanskrit, the Buddha’s words arising and sinking back into silence, evoking the ancient link of Buddhism and the land of India.

In the beginning, the Karmapa emphasized that since it would be difficult for us to imitate the life style of Milarepa, we can emulate Milarepa’s great qualities of complete renunciation, a sincere motivation, and great determination. We should not leave Milarepa’s life example on the page of a book, but incorporate it in our lives, making it present in our own experience.

Engaging a more scholarly discussion of the dates for Milarepa, the Karmapa explained that they are calculated based on the dates for Gampopa, which are clear and certain. Then dividing Milarepa’s life story into two parts, the worldly and the spiritual, the Karmapa began with the first one, narrating the early life of Milarepa: how his aunt and uncle stole his inheritance; how he, his mother and sister were forced into servitude; how Milarepa learned and practiced magic; and how he had remorse for the killings and destruction he had perpetrated. The Karmapa noted that in sending her son off to learn sorcery, Milarepa’s mother was following the worldly custom of supporting your friends and relatives and defeating your enemies. In turn, Milarepa was fulfilling his worldly duty by accomplishing the wishes of his mother. Further, he accomplished his spiritual goal of full awakening through his deep devotion, his one-pointed conviction, and his unrelenting determination.

Milarepa’s determination is legendary as he remained steadfast on his chosen path through tremendous difficulty. The Karmapa told the story of how Milarepa’s sister Peta came to see him in the wilderness and was ashamed of his destitute condition. But Milarepa was not concerned about how others saw him. Knowing what he had to do, he was uncompromising: No one could draw him away from his intention. Similarly, we should know what the essence of our life is and follow it without swerving: We must travel our own path.

If we do not, we could wind up like the elderly couple with an old donkey. First, both of them were riding it, but people said, “The poor old donkey! Look how they are mistreating it.” So the elderly man rode while the wife led the donkey. But people said, “Look how he makes his wife walk while he rides.” So they both walked. Then people said, “How stupid they are! Both are walking when they have a donkey to ride.” If we live in a society, we have to be aware of others and our surroundings, but if we try to please everyone, we won’t be able to live our own lives.

Milarepa’s spiritual journey began when he felt remorse for the destruction he had caused and wished to purify himself. First, he went to a Nyingma teacher, but was not able to benefit from his teachings. The lama told him, however, that he had a karmic connection with Marpa the translator and that he should go to look for him. When Milarepa finally found Marpa, he did not welcome his new student with open arms, and further, set before him a series of very difficult tasks, building and rebuilding a series of towers. Today, we could not even imagine going through such emotional and physical hardships and would probably wind up hiring a lawyer and taking Marpa to court. It was Milarepa’s unswerving faith and devotion that allowed him to accept Marpa’s way of teaching.

The morning’s talk was followed by a question and answer session. One woman asked: “We are told that mind is everywhere, and we are also told that there is no mind. How to reconcile these two statements?” The Karmapa replied that from one perspective, the wisdom (yeshe) of the Buddha is all-pervasive. There is not one phenomenon that it does not pervade. Expanding this thought, the Karmapa said in English, “The Buddha is not a person or individual. He is a kind of quality or wisdom.” From another perspective, mind (sem) apprehends what is appearing to our ordinary senses. When we say that there is no mind, it does not mean that nothing happens or that things do not appear. It means that things are not truly existent. In our confusion, however, we take what appears to us, the mind and its objects, to be real. But actually what manifests is illusion-like, mere appearances; there is no truly existent mind.

After a lunch break, Neten Chokling’s film, “Milarepa” was screened and then the Karmapa unveiled and released two new books: The Kangra Valley, My Spiritual Journey, by Rinchen Wangchuk and Northern Frontiers of Buddhism, by Benoy K. Behl.

The Karmapa began his afternoon talk by reprising the theme of faith and devotion, which were so powerful in Milarepa. Even though he might have been depressed or upset at times, Milarepa’s core devotion did not falter; he never gave up. And he also questioned himself: Is it that Marpa lacks compassion? Or is it my negative actions that have created this situation?

Some people have called Tibetan Buddhism “lamaism” because of its focus on devotion to the teacher. But we should remember that a special characteristic of Tibetan Buddhism is that it incorporates all three vehicles, the hinayana and mahayana as well as the vajrayana, which are practiced in sequence. That said, the role of the lama is key and we should know why. “Lama” is how the Tibetans translated the Sanskrit word “guru,” which means weighty with qualities, the way a tree is laden with ripened fruit. In brief, “lama” means a spiritual guide or master.

But the words are not as important as the way we experience a teacher. Do we sense that the Buddha is far or near? Is he some mythological figure in a distant land? Actually, the Buddha was born as a human being some 2,500 years ago. It’s important to remember this, and also to know that since we cannot meet the Buddha now, we can relate to our teacher as the Buddha in a human form. We can appreciate their qualities and know that they are acting for our benefit.

The Tibetan word for devotion, mogu, is made up of the two first syllables of two words: mo pa, which means “longing” or “yearning” and gu pa, which means “respect” or “eager for” and refers to devoting not only our mind, but the movements of our body and speech to the goal of becoming fully awakened. This is not half-hearted, thinking, “It’s OK if I get enlightened, and if I don’t, well, that’s not so bad.” We should have the constant longing and the steadfast courage of Milarepa. It is not enough to just offer incense to the Buddha; we must have the goal to become the Buddha ourselves.

Tomoe along the path of practice, it is crucial to know who we are. Are we good or bad? We may not know for sure. Pretending to know who we are when we don’t is a real difficulty. We may think we are a good person, but that may not be true. We could be like someone who is watering a flower, and from the outside, this looks like a good thing, but actually, the person is pouring hot water on the flower. For ourselves and others, this fake good person could be more dangerous than someone, or some part of ourselves, that we know to be negative. So it’s important to examine ourselves carefully.

The Karmapa concluded his talk with a summary. We do not need to imitate the life style of Milarepa, but through training, we should seek to develop his qualities of perseverance (or determination), discipline, patience, and wisdom, so that the example of his life does not remain a fiction but becomes an integral part of our lives. This is the inner meaning, the essence of Milarepa’s life story.