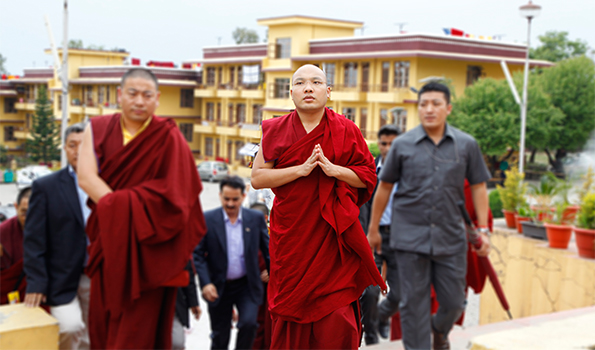 Returning today to his temporary residence at Gyuto Monastery, close to Dharamsala, the Gyalwang Karmapa successfully ended a period travel in North India where gave many teachings and led various dharma activities, including at some of the holiest Buddhist sites in the world.

Beginning in November 2013 he taught students in Delhi at the request of the Foundation for Universal Responsibility of His Holiness the Dalai Lama, and then later presided over the 5th annual Khoryug conference on environmental protection. Moving across to Bodhgaya he then took up residence at Tergar Monastery for over 2 months, where he first led the 17th annual Kagyu Gunchö debates for monks, including daily teachings for several weeks.

For an intense two weeks in early January 2014, still in Bodhgaya, he next led over 10,000 people through the 31st Kagyu Monlam Chenmo, including giving two sets of teachings, and personally performed in an unforgettable Guru Rinpoche lama dance. In late January 2014 the Gyalwang Karmapa historically presided over the 1st Arya Kshema Winter Gathering for Kagyu Nuns, teaching for a further 10 days.

After giving several empowerments and teachings to the Tibetan and Himalayan communities of Delhi during early February 2014, the Gyalwang Karmapa then spent 1 month at Vajra Vidya Monastery in Sarnath, near Varanasi, the seat of his main tutor Khenchen Thrangu Rinpoche. There he spent Losar or the Tibetan New Year, gave a Spring Teaching and led numerous pujas, including special lamp prayers for the wellbeing of all those connected with the missing flight MH370.

Returning to Delhi in late March 2014, the Gyalwang Karmapa taught there in early April at the request of the International Buddhist Confederation, the peak umbrella body representing Buddhists worldwide.

The Gyalwang Karmapa’s various activities over this period reflect both his stature as a respected Buddhist leader, as well as his personal commitment to environmental protection, the promotion of full opportunities for nuns, and his deep connection with the Buddhist peoples of India.

Historically the Karmapa incarnations are well known for travelling constantly throughout Tibet and surrounding areas, choosing to spend much of their lives on the road and meeting with their many disciples in the places they lived.

The Gyalwang Karmapa now resumes his regular daily schedule at Gyuto Monastery, with audiences for the general public taking place at 2.30pm each Wednesday and Saturday afternoon.