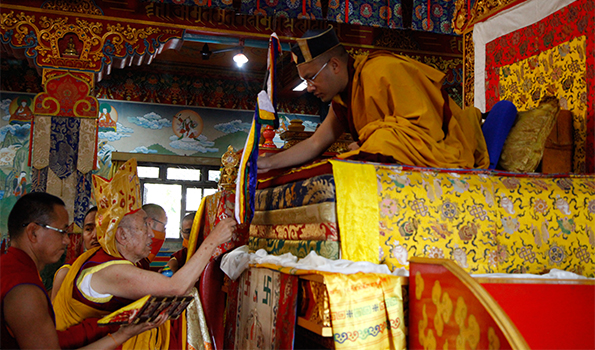 On the beautiful full moon day of March 16, five days of long life practice (tsedrup) for the Gyalwang Karmapa began at Vajra Vidya Institute in Sarnath, India. In the Tibetan Buddhist tradition, lamas are often requested to remain in the life for a long time, as it is believed that they have a choice over how long they stay. It is also taught that when followers have a good connection with the teacher, this petition can have a great effect. Khenchen Thrangu Rinpoche, a close disciple of the previous Karmapa and tutor to the 17th, called in all of his main lamas running centers abroad, from as far away as Canada to as near as Nepal, to be in Sarnath for these ceremonies.

The text for the practice is known as “The Union of Method and Wisdom, A Long Life Practice.” It was composed by Yongye Mingyur Dorje, a great treasure discoverer from Eastern Tibet, who had a close connection with the Karmapas and the Kagyu lineage. The relation between this practice and Thrangu Monastery began in Tibet during the early nineteenth century when another great treasure revealer, Chokgyur Lingpa, was invited to the monastery. He suggested that performing this practice on a yearly basis would avert obstacles and benefit the monastery, so it has been performed now for some two hundred years. Every autumn, most of the monks who participated in the recent ceremony have been doing this practice for Thrangu Rinpoche’s long life at his monastery in Nepal. So Thrangu Rinpoche was offering his supreme teacher the Karmapa the very best, the deepest, and the most essential of all his tradition had to offer, both in terms of the monks he has carefully trained for so many years and the practice that is at the core of his world.

On the initial day, the Karmapa came to join in the very first session at 6am, sitting on the magnificently carved and gilded throne, set just below a golden Buddha, his hands in the teaching mudra, reminding us that the Buddha first turned the wheel of Dharma a few minutes away in the Deer Park. The practice continued on for another four days and included the practice of Mahakala in the afternoon. Thrangu Rinpoche attended all the sessions of the puja, from early morning to late in the day. On the final day, the participants woke up in the very early morning to begin the puja at 3am. At 8am the Karmapa came again to sit on his throne, and five dancers dressed as dakinis of the five directions entered the open space in front of him to perform the long life dance. They circled around his throne as well and offered long, elegant silk scarves in white, blue, yellow, red, and green representing the five elements.

During the next hours, groups of disciples one after another made rich offerings to his body, speech, mind, qualities, and activities, requesting that he remain in this world to benefit beings for an extremely long time. The central aisle was filled with the ordained and lay sangha carrying rolls of elegant brocade from nearby Varanasi, glistening statues, colorful bags of grains, and stacks of texts. Thrangu Rinpoche himself made a special, extensive offering that included the eight auspicious symbols and eight precious substances, as he chanted the text in a resonant and powerful voice. One could not doubt that everything possible was being offered and all positive thoughts created to encourage the Karmapa to remain for a very long time.

All of these participants were representing hundreds of lamas and thousands of disciples from all over the world who were making the profoundly heartfelt and altruistic aspiration that the Karmapa stay with us for innumerable years to come, continuing to guide his students along the path to full awakening. In a lovely gesture, the Karmapa’s office of administration Tsurphu Labrang also made a special long life offering to Thrangu Rinpoche, so that all the blessings came around full circle.