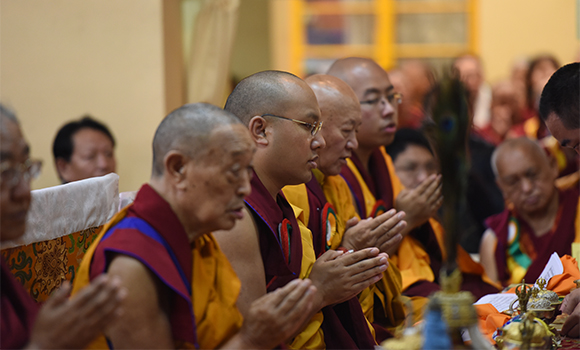 June 21, 2015 – Dharamsala, India
In the early hours of this Sunday morning, the lay and ordained Sangha were forming long lines to enter the grounds surrounding HH the Dalai Lama’s main temple. To celebrate his eightieth birthday, four thousand members of the ordained Sangha and some three thousand lay people would come to fill the temple verandas and the park area below.

The main lamas arrived at six am to begin their long life ceremonies for the Dalai Lama. Leading the pujas was HH Sakya Trizin Rinpoche and in addition to HH the Karmapa, among the great lamas present were Ganden Tri Rinpoche, Drikung Kyabgön Rinpoche, and Menri Trizin Rinpoche. As their chanting evoked the long life deities to bless the Dalai Lama, those outside the hall participated through watching the screens set out around the temple.

After the long-life pujas, a colorful procession, accompanied the Dalai Lama to the temple while he tempered its formality with his personal warmth, stopping to greet people along the way. Once he was on his throne in shrine hall, the chanting began with extensive praises to the Buddha. Soon Tseringma and the Nechung oracles made their appearances and gave messages to him.

Sakya Trizin recited a beautiful prayer for long life of the Dalai Lama and the teachings and also offered a mandala of saffron rice followed by the traditional auspicious gifts. The Dalai Lama spoke briefly, explaining that when the Tibetans came to India, they had changed to a western calendar. This year, however, they decided to celebrate his birthday with the western calendar for the year (2015) and the Tibetan calendar to for the month (the fifth) and the day (the fifth). Speaking of the Nalanda tradition of Buddhist panditas, the Dalai Lama explained that it was the oldest in India and that these scholars had an inconceivably deep insight. Studying and practicing their texts would be the best birthday present one could give him.

The morning’s festivities came to a close with the organizing committee’s chairperson giving thanks to everyone. As people relaxed, the same lunch was offered to everyone, high lamas and ordinary guests as well. It was the perfect end to a special morning.