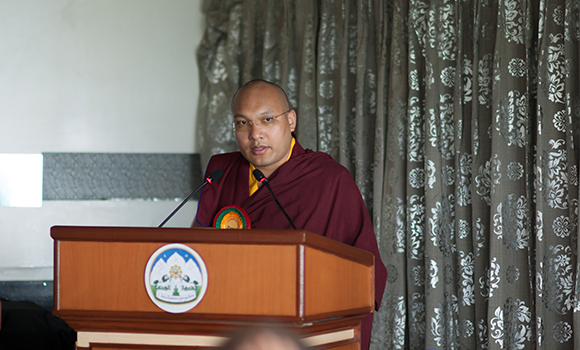 June 18, 2015 -Dharamsala, India
On this radiant summer day, crowds of tourists were moving up and down the narrow roads of McLeod Ganj, while slightly off the beaten path, the elegant Surya Hotel was hosting the Twelfth Religious Conference of the Four Major Schools of Tibetan Buddhism and Bon Tradition. The three-day gathering was organized by the Central Tibetan Administration’s Department of Religion and Culture. Today its director, Kalön Pema Chinjor, waited with a long white scarf at the steps of the hotel to receive HH the Karmapa. The minister escorted the Karmapa inside the grand hall where the leaders of the four main Buddhist lineages and the Bon tradition had gathered along with representatives from all the Tibetan Buddhist monasteries and nunneries, including tulkus, khenpos, and lamas. In addition to the Karmapa, the important spiritual leaders who addressed the conference included Sakya Tridzin Rinpoche, Ganden Tri Rinpoche, Taklung Shabdrung Rinpoche, and representatives of Taklung Tsetrul Rinpoche and Drukchen Rinpoche.

At the beginning of his talk, the Karmapa mentioned that previously in Tibet there was no tradition of the different lineages assembling for a large conference like this. But after the Tibetans came to India, HH the Dalai Lama through his great kindness began these meetings and now it is the twelfth one. The Karmapa noted that the conferences have taken place in a spirit of equality: participants are not thinking, “I’m important and they’re not.” Everyone sees each other as equals, which fosters harmonious relationships.

The need to work together in harmony is also true for the Tibetan people and culture in general. Now that we are living in a digital world where it is easy to make connections, they should be joining together. In particular, the important lamas of the different lineages and the Sangha have a strong and influential position in Tibetan society. Having this direct contact with the Tibetan people, it is important that they think and act in a beneficial way. The Karmapa emphasized that it is important to follow the precise meaning of HH the Dalai Lama’s advice.

In the past, these meetings have gone well and have been held regularly. Usually, the Karmapa noted, he has had a close connection with the Department of Religion and Culture and has seen exertions they have made and the difficulties they have gone through. Sometimes when speaking with the minister, the Karmapa thought, “I have the name of a great lama, but the efforts this minister benefit the teachings more than mine.” It is not easy for people doing this work, for few see all the work the minister actually does.

The Karmapa then turned to the state of Buddhism in the contemporary world, stating that there is both hope and danger. The hope comes from the fact that CEOs of famous companies like Google and Facebook are interested in finding peace and well-being through meditation, and the essence of these practices to develop tranquility and an understanding of interdependence comes from Buddhism. During his recent visit to the United States, the Karmapa visited the headquarters of Google and Facebook and discovered that they had a special place in their buildings for meditation.

The Karmapa then turned to the danger that faces Buddhism―the conflicts with other religions and within in Buddhism itself. When he was in the United States, many people were talking about the situation in Myanmar (Burma) between the Buddhists and Rohingya, and some Burmese monks had even asked him as a Buddhist leader to help with the situation. The Karmapa said that it would be good for Tibetan lamas to speak about this conflict.

As for the internal dissention, the Karmapa related that within Tibetan Buddhism one can find many accounts of conflicts between the various Buddhist traditions. Sometimes he felt that it might be better not to read history as what it relates about this hostility is rather depressing. Nevertheless, from studying the lessons of history, we can learn how to act more wisely in the future. Actually the Buddha has predicted that Buddhism would be destroyed not from the outside but through internal conflicts. Therefore, the Karmapa said, “Harmonious relationships between the Tibetan traditions are extremely important, not only for the holders of the teachings, but also for those who know the Dharma.” The Karmapa added that leaders of the traditions should not limit their connections to public or official meetings, but also cultivate deep personal relationships.

The Karmapa closed his message with wishes for the long life of His Holiness the Dalai Lama as he turns eighty years old and for the stable life and flourishing activity of the religious leaders of all traditions.