Royal Welcome for His Holiness the Drikung Kyabgön Chetsang 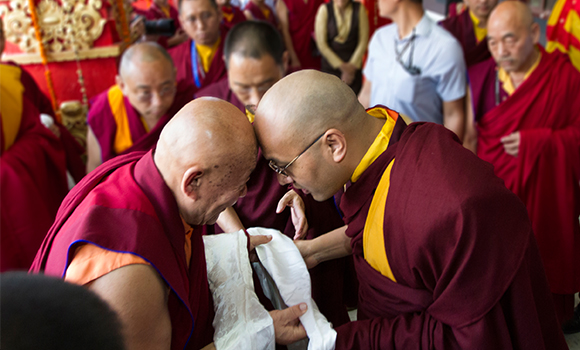 Tergar Monastery, Bodhgaya -13 February, 2016
His Holiness the Drikung Kyabgön Chetsang Trinley Lhundrup was accorded the highest honours in the Tibetan tradition when he arrived in Bodhgaya today. His Holiness, the 37th in the line of throne holders in the Drikung Kagyu lineage, will be the Chief Guest at the commemoration of the life and activities of the 16th Gyalwang Karmapa to be held on 14th February, 2016.

Three welcome gates had been erected along the approach road to the monastery. More than a thousand laypeople holding khatags and incense lined the road from the first to the second gate to greet His Holiness and his entourage; thousands of monastics lined the road between the second gate and the main entrance to Tergar Monastery; and Rinpoches and senior monks waited beyond the gate within the shrine room courtyard. As the car approached the second welcome gate, the serbang or golden procession joined to escort it. This highest of accolades is reserved for His Holiness the Dalai Lama and the highest of Rinpoches only. Monks swung censers of Tibetan incense to purify the environment, others held victory banners aloft. Musicians blew on gyalin and beat hand-held drums as they walked in a measured march ahead of the car. Some monks wore yellow pointed tsesha, others red ceremonial hats. Some were clad in ceremonial brocades, others in bright red and rich orange. Slowly, in a great richness of sound, colour and scents, the grand procession drew into the grounds of Tergar Monastery through a haze of juniper smoke issuing from the sangkhang at the gates.

As His Holiness the Drikung Kyabgön Chetsang stepped out of the car, a monk holding the golden parasol of royalty came to walk behind him. His Holiness was welcomed by Their Eminences Jamgon Kongtrul Rinpoche, Gyaltsab Rinpoche and Surmang Gharwang Rinpoche, and by Mingyur Rinpoche. He then ascended the steps to the main shrine room where the 17th Gyalwang Karmapa waited on the porch. They greeted each other warmly and after they entered the shrine room, the great temple doors were closed to afford them some privacy. Together they lit butter lamps in front of the great Buddha statue, and then His Holiness the Karmapa escorted His Holiness the Drikung Kyabgön Chetsang upstairs for a private reception.

The founder of the Drikung Kagyu, Kyobpa Jigten Sumgön, was a contemporary of the founder of the Karma Kagyu, Dusum Khyenpa. The First Karmapa expressed deep respect for Kyobpa Jigten Sumgön and not only received teachings from him at his monastery Drikung Thil, but saw him in a vision as a buddha and his monastery as the mandala of Chakrasamvara.

It was deeply moving to witness that 850 years later, a close connection and great warmth continues to exist between the leaders of these two great lineages.