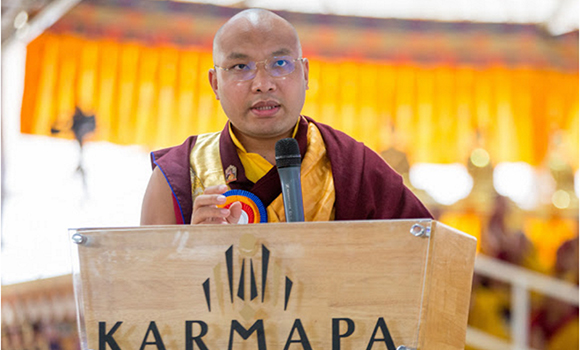 14 February, 2016 -Monlam Pavilion, Bodhgaya,
Seated on a simple throne directly below the eighteen-foot image of Shakyamuni Buddha, a life-like replica of the Sixteenth Karmapa, cloaked in golden brocade emblazoned with dragons and flowers and wearing his black activity hat, gazed down on the assembly of 10,000 gathered to celebrate his life and activities.

Many dignitaries and eminent people from across the Indian subcontinent and the world had gathered for this special event. They included eminent Rinpoches and learned Khenpos, members of the Bhutanese royal family, politicians, government officials, academics, and thousands of ordinary monks, nuns and laypeople whose lives had been touched in some way by the 16th Karmapa. The guests were dressed in a rich variety of national dress. Tibetan dignitaries in chubas, Bhutanese in their own distinctive hand-weave stripes and checks , and Sikkimese dressed in rich, colourful brocades. All the extant traditions of the Dagpo Kagyu were represented: Drikung, Drukpa and Karma Kamtsang. On the Monlam Pavilion stage, a shrine table, decked in red and gold cloth, displayed an array of torma offerings and victory banners. To the right of the stage a torma-shaped tsog offering, cleverly crafted out of red apples, rose twelve feet high, capped with symbols of the moon, the sun and the Three Jewels.

At 9.30am the sound of gyalin announced the arrival of the Chief Guest, His Holiness the Drikung Kyabgön Chetsang, escorted on to the stage by His Holiness the 17th Karmapa. Together the two spiritual leaders walked up to the statue of the 16th Karmapa and offered katags. Four comfortable chairs had been arranged centre stage, where HE Jamgon Kongtrul Rinpoche and HE Gyaltsab Rinpoche were already seated. They rose to greet His Holiness the Drikung Kyabgön as the Karmapa showed him to the seat of honour. Immediately, the ceremonies began with celebratory Tibetan tea and sweet rice.

Two MCs, Sherab Tharchin in Tibetan followed by Ngodup Tsering in English, provided continuity between the events. Quoting a prophecy of Shakyamuni Buddha found in the Samadhi Raja Sūtra, they set the tone for the commemoration:

Two thousand years after I have passed,
The teachings will arise in the land of the red-faced men.
They will become disciples of Avalokita.
In that degenerate time for dharma,
The bodhisattva, Lion’s Roar,
Will appear and be known as Karmapa.
He will attain the samādhi empowerment and tame beings,
Establishing them in well-being through sight, hearing, recollection, and touch.

The first event was a rendering of The Praise to the Three Jewels by the nuns of Drupde Palmo Chökyi Dingkhang Nunnery in Bhutan, followed by a welcome by Mr Karma Chungyalpa, General Secretary of the Karmapa’s Office of Administration, who read out a letter from Dr Pawan Chamling, the Honourable Chief Minister of Sikkim, in which the CM had written:

We are all aware of the special relationship and the bond that the 16th Karmapa shared with Sikkim and the Sikkimese people. The 16th Karmapa was a great master who demonstrated intuitive wisdom, joy, and loving kindness, his compassionate activity for others being beyond words or concepts. He was such a highly respect