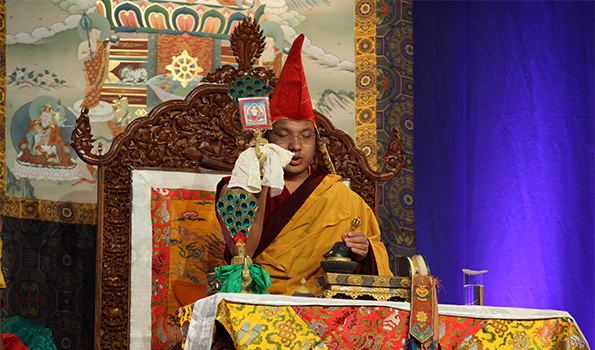 On the final day of the teachings the emphasis turned towards practice requirements for Buddhist practitioners. In keeping with the overarching theme of the ngondro or preliminary practices, the morning session was dedicated to a Vajrasattva empowerment. This is necessary for those who wish to complete the second part of the special Mahamudra preliminaries, the Vajrasattva Purification practice.

Shortly before nine o’clock, His Holiness arrived to perform the preparatory rites of self-initiation. The audience of his devotees supported his activities by softly chanting “Karmapa Khyenno”—“Karmapa, think of me”. After an hour of preparation, His Holiness exited the auditorium and then returned swiftly to take his seat. Joining his palms together in traditional greeting, he stood on the throne smiling warmly. As His Holiness gazed out over the audience, embracing everyone with his love and compassion, his face was reminiscent of the bodhisattva Dorje Sempa [Vajrasattva in Sanskrit] who also smiles, partly in amusement at the childish misbehaviour we humans engage in, and partly in encouragement, like a loving, concerned parent.

Generally, the Vajrasattva empowerment prior to Ngondro is given in the Nyingma Mindroling tradition. In a short introduction, the Karmapa explained that this form of the empowerment was in the lineage of Marpa Lotsawa, one of the three forefathers of the Karma Kagyu tradition. The Vajrasattva practice is regarded as the most effective one for the purification of any wrongdoing in contravention of the three vows. When we hold a vow, and commit a negative action that breaks the vow, the Karmapa explained, the consequences are much greater. For example, though the act of killing is always a negative act, if we hold a vow not to kill, the consequences of killing are much greater, particularly in terms of the effect on one. Buddhists believe in the continuation of the consciousness, and it is this effect on the consciousness, the imprint, which continues from life to life.

Referring to the actual practice, His Holiness then explained why we have to purify all our negative actions since beginningless time. Even scientists have found it difficult to establish exactly when the universe began. Though there are theories such as the Big Bang, no one can say definitely when the universe was born. Similarly with consciousness, it is difficult to establish when exactly our mindstream began, so we purify all negative deeds from beginningless time.

In addition, we are unable to remember the misdeeds of this lifetime, let alone misdeeds we committed in our previous lives. For this reason, as we sit in front of our shrine to practise Vajrasattva purification, we call on all the buddhas and bodhisattvas to bear witness.

There are four powers for purification, but of these the two most important are remorse or regret for the negative action we have committed and the resolve not to commit the same negative action in future.
His Holiness emphasised that there is a distinction made between the person who has committed a negative action and the action itself. It is the action which is bad, not the person, so purification is of the negative action. It is important to understand this separation and be able to create distance between ourselves and our misdeeds; otherwise we can become overwhelmed by guilt and unable to free ourselves. Some people, he warned, are consumed by so much guilt that they cannot escape from the negativity they have created in their minds.

We need to understand that we committed the misdeed because we were under the control of negative thoughts and emotions [the Tibetan term is nyonmong ], almost like someone who is mentally ill. Drawing on his own experience of anger, the Karmapa illustrated how, under the sway of the nyonmong, our personality and behaviour can change radically.

“Sometimes when I was angry I became a different person. When I recall this situation, I am frightened of myself. I am not familiar with this person. Who is he? He’s very dangerous!”

If someone beats us, it’s the stick which hurts us, but we are never angry at the stick, we are angry at the person who wields the stick. Using this analogy, His Holiness argued that someone under the sway of the nyonmong is like the stick; the emotion is controlling them. We need to adopt this perspective whenever we consider both our own negative actions and those of other people. Especially, when we practise patience, we need to think very carefully and ask why the person did something to harm us

We should always differentiate between the action and the person.

The second power that the Karmapa highlighted as most important is the power of resolve not to commit the same negative action again.

He noted that some people were reluctant to make such resolutions because they felt they might break them in future. His advice was that as we cannot see the future, it’s better to promise to try not to commit that negative deed again. We need to be courageous and make the resolution never to do such a negative action again.

His Holiness then gave the empowerment and the oral transmission of the 100 syllable mantra which is the central part of the practice.