The Empowerment of the Eighty-Four Mahasiddhas 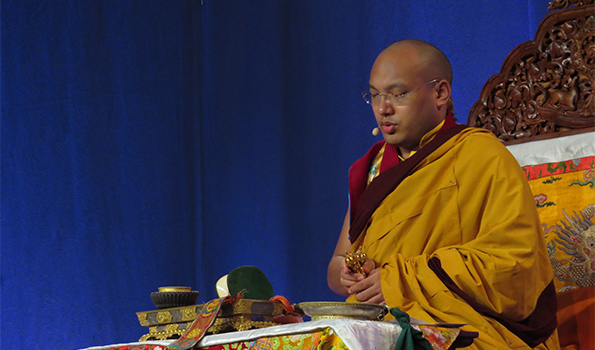 On the morning of the 30th, a double-tiered shrine was set up next to the Karmapa’s throne. On the top level, the central focus was the image of a deep blue Vajradhara (Dorjechang),surrounded by the powerful eighty-four mahasiddhas. It is flanked by two vases with their curving spouts and peacock feathers. Infront of Vajradhara is placed a metal mandala plate with heaped rice and next to it, a glistening long life vase. On the level below are the seven traditional offering bowls, one of which has a tall sculpted torma, an offering of nourishment, which is decorated with two circular flower ornaments in red and blue. All these blessed objects on the shrine are the basis for a vast mental offering that fills space.

This empowerment of the eighty-four mahasiddhas is the first one the Karmapa will give in Europe. The siddha, or accomplished masters’ tradition, is a lay one that includes both men and women. They were the great meditators of India, whose lineage comes into the Kagyu school through Tilopa, who some say is the greatest of all the siddhas and who met Vajradhara directly.

During the morning talk, the Karmapa shared memories from his life in Tibet:”Situ Rinpoche and Gyaltsap Rinpoche came twice to Tibet for short visits to give me empowerments, reading transmissions,and instructions, but of course, they couldn’t give me all of them. So when people asked for empowerments, I only had a couple to give, and I was always repeating these, as I had not been able to receive others. I was not feeling good about this. Having only two to give was a bit embarrassing. Then I was a bit of a child with a child’s mind. And my attendants were always pressing me to give bigger and more empowerments, so before I left Tibet, I gave this big empowerment of the Eighty-Four Mahasiddhas two times.I felt really good about it. This was not just the empowerment of one mahasiddha, but eighty-four.”

The Karmapa spoke of how he first received this empowerment. Before he was recognized as the Karmapa, his family took him to see Situ Rinpoche at his main seat, Palpung Monastery.The Karmapa recalled, “It’s far from my home town, but we went there for a reason. My father thought I was a special person. He told me that when I was born auspicious things happened. But we didn’t know which tulku I might be. We didn’t believe it was the Karmapa, he was too high. So my father brought me to see Situ Rinpoche and to find out if I was a special tulku.

“At that time, Situ Rinpoche gave many big empowerments, including this one. I was sitting together with other monks. I was five, maybe six years old and a bit naughty. I didn’t visualize anything, but was going here and there. I don’t think I really received the empowerment, but I was a bit puffed up, thinking I had. Before I left Tibet, I gave this initiation two times, and today is the next time after that. The empowerment has all four levels, but we will do only the first one.”

After lunch, the monks placed an intricately carved wooden screen in front of the shrine. About an hour before the empowerment, the Karmapa came to sit behind it and perform the preparatory practices. An audience of some fifteen hundred chanted Karmapa Khyenno, and from time to time, the sound of the Karmapa’s bell could be heard clearly ringing through the sonorous field the chanting created.

Having finished his preparations, the Karmapa walked back to the throne and took his seat. He gazed down for a moment, pausing, and then looked out to the audience and began to chant the text in a resonant, powerful voice: “So that all living beings may be freed of suffering and come to the level of Vajradhara….”After a few minutes he paused to explain that there are two levels of empowerments, the preparatory and the actual. Today, he would give the vase empowerment, which is the initial level.

But first, he had promised to give the refuge vows, so he started with a pithy explanation of their meaning. If we are slightly sick, we can try to cure ourselves, but if we have a serious illness, then we have to see a specialist and find a top hospital with excellent nurses and everything needed for our care. If we can do all this, the chances of our healing are greater. The situation is similar to the suffering of samsara. If we wish to be free of this illness, we must rely on the doctor of the Three Jewels and take the medicine of the Dharma. The real meaning of taking refuge, therefore, is to practice, to make use of the Dharma. We make a commitment to do this and promise to keep it.

The Karmapa then turned to the empowerment and explained that this would be a blessing one. He donned the bright red pandita hat with its curving peak and thin gold stripes, and received the mandala offering and the representations of body, speech, and mind from Chime Rinpoche.Stopping for a moment during the empowerment, the Karmapa spoke briefly of the eighty-four mahasiddhas. “Actually,”he said, “there are more than eighty-four mahasiddhas. These highly accomplished masters, both men and women,can be found in India, Tibet, and even in Europe where they may remain unknown. This special group of eighty-four gathered at a ganachakra, or Dharma feast, maybe something like a party, during which they all received the full blessing of their teacher.”

The blessing empowerment ended with a mandala offering of thanksgiving and the dedication of merit for the sake of all living beings. To complete the empowerment, the Karmapa took his place again at the shrine behind the screen, while light filtered through its filigree panels to cast patterns on his robes, making them float as if coming in from another world.