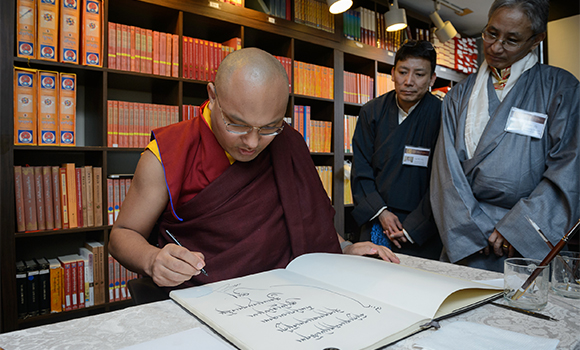 March 26, 2015-Cambridge, Massachusetts
On his first day in Cambridge, His Holiness the Karmapa was invited to lunch at the Tibetan Buddhist Resource Center (TBRC) on Harvard Square whose mission of preserving and making texts available lies close to the Karmapa’s heart. TBRC was founded in 1999 by the great Tibetologist Gene Smith with the goal of sustaining and making accessible to anyone, anywhere, the whole range of Tibetan literature.

During his visit, the Karmapa blessed the offices, and then the staff explained their work to him. TBRC scans texts and serves as a repository for eTexts, while cataloguing and organizing them all into a modern digital library, which makes them easy to find. TBRC also seeks out rare or undiscovered texts and makes everything available online and in remote locations. This largest Tibetan library in the world (over ten million pages scanned and one million pages of eTexts) is now a part of the Harvard Library so that the texts and immense database of information will be preserved into the distant future.

At the time of the Karmapa’s visit, the Executive Director, Jeff Wallman, was in Kathmandu on a research trip and sent a letter for the Karmapa, which read in part, “Our goal is to bring all the texts together so that there is no danger that they will ever be scattered, lost, or destroyed.” During the luncheon the Karmapa enjoyed a relaxed and animated conversation with the Tibetan staff about research and told them about his own organization, Adarsha [reference the article on Adarsha from the website], which is also involved in preserving texts (the Litang Kangyur in particular) and opening them out for research through a variety of software tools.

When Gene Smith met the Karmapa in 2008, he had wanted to offer the Karmapa a rare Shangpa Kagyu text, but it had somehow disappeared. The staff was able to find it and now could fulfill Gene’s wish to present the Karmapa this special volume, nestled in a golden brocade-covered box. The Karmapa responded with a brief teaching for the staff and Board members. He praised Gene calling him a lord among scholars, and beyond this, his accomplishment in preserving and propagating Tibetan literature was immense. He was the greatest scholar of Tibetan Buddhism and his passing was a great loss, yet his work and vision continue through TBRC. This was Gene’s greatest contribution since TBRC is the most important organization for the preservation of Tibetan literature and the Dharma.

The Karmapa averred that it has made a huge difference in his own life. He uses the TBRC website all the time and appreciates it especially when he is traveling since he does not have to carry suitcases loaded with heavy books. In the future, the Karmapa proposed, “For the digital preservation of the Buddhist tradition, both spiritual and secular, we work together and continually share information.”

Before he kindly posed for photos with the staff and Board, the Karmapa wrote in flowing and elegant calligraphy an inscription for TBRC:

The Tibetan Buddhist Resource Center, which I deeply admire, has rendered incomparable service to the spiritual and secular traditions of Tibet.