The Ceremony to Introduce and Recognize Bokar Rinpoche’s Reincarnation 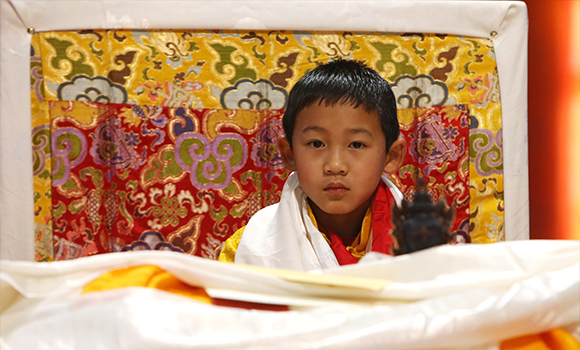 21 January 2015, Tergar Monastery Bodhgaya.
A crescendo of anticipation has built up to this most special day when Bokar Rinpoche’s reincarnation (yangsi) will be presented to the world. The day before, the Gyalwang Karmapa had announced:

Tomorrow is the first day of twelfth Tibetan month so we’ll recite the smoke offering (sang) puja, Billowing Clouds of Amrita. Also tomorrow morning—and we’ve waited for this a long time, more than ten years—finally at 10am Kyabje Bokar Rinpoche will be introduced. At that time, we’ll recite the Prostrations and Offerings to the Sixteen Elders. This ceremony will be broadcast over a live webcast so that many disciples of Kyabje Bokar Rinpoche will be able to see it and participate.

In preparation for this momentous event, the Karmapa spent hours the evening before in the shrine room making sure that everything was perfect. A small throne covered in bright brocades is set up between Jamgon Kongtrul Rinpoche and Khenpo Rinpoche Lodrö Donyö from Bokar Rinpoche’s monastery in Mirik, who has carried the responsibility of caring for the monastery and finding the reincarnation ever since Bokar Rinpoche passed away in 2004.

For hours, the Karmapa supervised the arranging of a richly laden altar and the adorning of the grand statue of the Buddha with new robes, their golden light a shimmering river in the center of the shrine. Every detail was considered again and again; even the offerings filling the Buddha’s alms bowl are renewed. The final touch is a twenty-five foot long white kata laid across the lap of the Buddha as the last offering.

On the twenty-first starting at 7am, the sang puja by Jamgon Kongtrul Lodro Thaye is performed with nuns in the lead and taking up most of the shrine hall, which seems appropriate given the previous Bokar Rinpoche’s devotion to Tara. The puja visualization fills all of space with a multitude of offerings made to the buddhas down through all levels of beings; no one worthy is left out, nothing suitable to offer is not given. Afterward the Karmapa bestows a reading transmission for the beautiful long life prayer he wrote for the yangsi in three stanzas: one for his past life, one for the present, and one for the future. It is a prayer that will follow Bokar Rinpoche throughout this life and the numerous ones to follow.

After this preparation, the ceremony for Bokar Rinpoche begins a little after 10am with the entrance of the Karmapa, who walks to his throne with great dignity, regal like the king of Dharma that he is. The Karmapa is famous for recognizing tulkus, perhaps his most amazing ability. Since his coming to India, Bokar is the third reincarnate lama he has recognized, and perhaps the first tulku recognition and hair cutting ceremony to be webcast live. Over six thousand people from all over the world will connect through the web.

As a prelude to describing the search for him, comes an eloquent praise of Bokar Rinpoche, which is also a profound Dharma teaching. Three monks standing near the Karmapa give the words in Tibetan, English, and Chinese.

Skilled in means, from compassion you took birth as a Shakyan;
You vanquished Mara’s forces while others could not.
Your body resplendent as a golden Mount Meru,
O King of the Shakyas, grant us goodness.

The ultimate nature of all phenomena, the nature of our mind, the potential of buddha nature, is just the way it is described:

Just as before, so is it later,
The unchanging Dharma nature.

It is free of arising, ceasing, or changing. The bodhisattvas who dwell on the levels are free of birth, death, aging, or decline.

Yet for the buddhas and bodhisattvas to accomplish limitless benefit for living beings:

Those whose character is compassion
Display birth, death, aging, and illness.

As this shows, they display the inconceivable illusion of birth. This is the nature of buddhas and bodhisattvas, and thus is it now with the reincarnation of Bokar Rinpoche, the glory of Buddhism and of sentient beings.

After this, Khenpo Rinpoche Lodro Donyo is invited to relate the essential facts of the search for the reincarnation of Bokar Rinpoche. [add in link to the official report] After this was translated into English and Chinese, the three monks continued to relate in three languages: “Gyalwang Karmapa is the embodiment of the activity of all the buddhas of the past, present, and future, Avalokiteshvara in human form. The nature and manifestations of all phenomena appear clearly in the mirror of his wisdom. So we would ask him to speak about the reincarnation of Bokar Rinpoche.”

In response, the Gyalwang Karmapa reads his letter of recognition which is included in the account of the search. He then dons his black and gold activity hat, and the practice of the Sixteen Elders (or Arhats) begins. These elders are known as the protectors of the Dharma, and the words of the text are particularly appropriate for this occasion:

Sixteen Elders, you have cast aside your own welfare
And remain in the jungle of samsara for the benefit of others.
Come here through your commitment and compassion….
I invite you to this garden of precious merit.
I pray that you come since my offerings are for beings’ benefit.

At this point in the text, the chanting stops, and the sound of reed horns is heard coming from the back of the Pavilion. Preceded by monks wearing yellow cockade hats, the yangsi in a golden yellow, full length chupa walks down the main aisle to stand in front of the Karmapa. Here, he performs three bows on a square of yellow brocade framed in red. With these the traditional hair cutting ceremony begins. The yangsi offers the Karmapa a long white kata and receives one back. He makes the traditional offering of a mandala, and the representations of body (a statue), speech (a text), and mind (a stupa) to the Karmapa.

Afterward, the young Bokar Rinpoche sits on the square of brocade in front of the Karmapa to receive refuge vows and the precepts from him. After three more bows, he stands near the throne while the Karmapa cuts a piece of his hair, blesses him with water from an ornate vase, and reads out the formal proclamation of young tulku’s recognition and new name:

The inspiring name translates as Karma Glorious Intellect, Victory Banner of the Dharma, Divine One Utterly Victorious Over All. The yangsi now receives a kata and red blessing cord from the Karmapa, which completes this first major ceremony in a tulku’s life. The yangsi then turns to offer a kata to Gyaltsap Rinpoche, who gives him a wrapped present, and to Jamgon Kongtrul Rinpoche, next to whom the newly recognized Bokar Rinpoche takes his seat on the throne that waits for him.

As the puja starts again, its refrain takes on added meaning after the recognition:

Grant your blessing that the gurus live long,
And that the Dharma flourish.

Khenpo Rinpoche Lodro Donyo leads the representatives from Mirik Monastery in offering a mandala and representations of body, speech, and mind to his new student and old teacher. The longer the young reincarnation sits on his throne the more comfortable he seems, as if he is settling into a familiar world; he touches foreheads with some of the monks and blesses other fully with his child’s hand, old and young at once. Actually, it is Khenpo Rinpoche at his side who seems younger, almost childlike in his great delight and joy to be sitting next to his beloved teacher at last.

Before the end, the puja is paused for a festive offering of tea and rice. During the silence, the discipline master of the nuns reads out the names of the donors on this auspicious day and elaborate praises of the new yangsi. Streams of offerings continue and the ceremony ends with long life prayers for the Gyalwang Karmapa, whose brilliant and inconceivable wisdom has made this day possible.