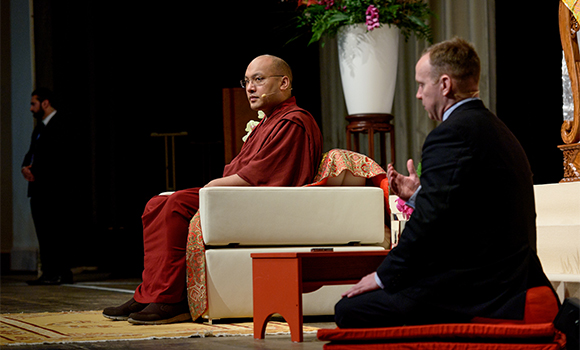 Bonn, Germany – 29th August, 2015
After a full day of teachings, His Holiness the Karmapa set aside time to meet with Tibetans living in Europe. During a special audience organized by the Association of Tibetans in Germany, the Karmapa reflected on their shared condition as refugees and offered individual blessings to all those who had traveled from across Europe to meet him. As the Karmapa explained to them, he seeks out opportunities to connect with Tibetan as well as Himalayan communities wherever he goes. “I consider this important,” he told them, “and when we are able to meet, I feel I have accomplished an important responsibility and this inspires and encourages me.”

The evening began with a brief introduction to the history and activities of the association by its chairperson, Lobsang Phuntsok. He explained that among the 150 Tibetans and Himalayans in attendance, while many live in Germany, others had come from France, Switzerland, Belgium and other surrounding countries.

When requested to address the Tibetan community, the Karmapa began by acknowledging the experiences faced by refugees today in Europe, a theme he had touched on in several of his talks in recent days. “As we have been seeing,” he said, “the condition of refugees migrating into Europe is at a critical state and this is an added challenge you face living here as refugees at this particular moment in time.”

His Holiness the Karmapa observed that Tibetans are often filled with excitement and optimism when they initially receive their permission to migrate to European countries, but upon arrival find that conditions are far more challenging than they had anticipated. As they seek to make their way forward in exile, the Karmapa called on Tibetans “never to forget” why they left Tibet seeking refuge in the first place.

“The situation that originally sent us into exile continues within Tibet,” he said. “Even though the pace has slowed somewhat in recent years, the flow of people leaving Tibet has continued unabated since 1959.”

The Karmapa reminded them that “had we stayed in Tibet, we would face great difficulties in preserving our culture and religion, and would lack full freedom to fulfill the responsibilities that come along with our identity as Tibetans”.

“Wherever we find ourselves as refugees,” the Karmapa said, “it is very important that we not forget the main reason for going into exile: to have more freedom to preserve and protect the Tibetan culture and religion, and to perform our duties towards the Tibetan people.”

The Karmapa then directed his remarks toward future prospects for the preservation of Tibetan identity and culture in exile, and pointed out two important factors: the quality of their leadership and the commitment of the Tibetan people themselves.

“Among the conditions we need in order to avoid become discouraged is leadership,” he said, “ and especially the exceptional leadership of His Holiness the Dalai Lama who has led us and unified us, and the major spiritual leaders and good-hearted Tibetans cooperating under His Holiness’s guidance.”

As a second important condition, the Karmapa pointed out the key role of the Tibetan people’s own steadfast resolve, singling out the example of Tibetans within Tibet who keep alive their Tibetan identity in the face of great challenges. “They display even greater determination and courage in doing so than those of us living in free countries,” he commented, adding that Tibetans in exile can draw inspiration and learn valuable lessons from their example.

“We must never forget the kindness of our leaders and the commitment of the Tibetan people, especially those inside Tibet,” he told those assembled.

The Karmapa then turned his attention to the local concerns of Tibetan refugees living in Europe. He noted that although the total worldwide population of Tibetans is listed as 6 million, it seems likely that it falls somewhat short of that figure. As such, Tibetans throughout the world generally form a sort of ethnic minority, particularly within Europe where they often live scattered across various countries and regions.

“Even if you are the only family of Tibetans in the area,” he told them, “you should recognize that every family counts.” He urged them to cultivate strong family ties, take efforts to ensure their children receive a good education and seek sound means to earn a living. Joking that he had little ability to aid them in that regard, he said he could and did offer them all his prayers, leaving the rest to them.

Reflecting on the challenges facing the Tibetan community in preserving its identity, the Karmapa observed that some ethnic minorities opt to stick together and isolate themselves from the rest of society. “I am not convinced that this is the optimal way for us,” he said. Rather, the Karmapa urged Tibetans to strike a balance between standing apart and fitting in. He advised seeking out means to preserve their culture in a way that is compatible with the social context and modern times they are living in.

Outlining a strategy that avoids those extremes, on the one hand, he called on his audience to know who they are and stand their ground, so as to not lose their balance and become prey to the pull of external factors. On the other hand, he counseled them to reach out to others and communicate. “Stay open to the society you live in,” he said. “Be willing to make connections and to interact.”

As he concluded his remarks and the staff began preparing the space for individual blessings, the Karmapa joked that during his first visit to Germany, he had planned to give individual blessings, but the Tibetans all pressed forward in a huddle and surrounded him, completely filling the mid-sized hall. “That sort of crowding seems natural to us Tibetans and Himalayans, and it feels comfortable,” he said with a smile. “We might feel awkward if we stayed straight in an orderly line, but it made it impractical that time to give individual blessings. This time, the hall is so large that even if you all rush the stage, we still have space!”

On that warm note, His Holiness directed his attention to the long line of Tibetans and Himalayans who had gathered – from the very young to the very old – connecting with each one-by-one and offering all his individual blessing.