An Impressive Vietnamese Temple to the South of Paris 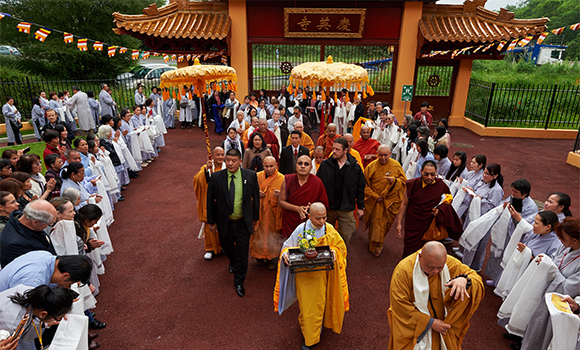 June 1, 2016 – Evry, France
This afternoon the Gyalwang Karmapa visited the new Vietnamese temple complex, called Chua Khanh Anh, named after a great Vietnamese master and located south of Paris in Evry. The founder of the temple, Thich Minh Tam, had laid its foundation stone twenty-one years ago, and a very short while ago, the community had received their official certificate of occupation from the local government. Several members of the Vietnamese Sangha said they considered it a very auspicious sign that the completion of their building project coincided with the Karmapa’s visit.

Trinh, a member of the Sangha, further explained that the purpose of the new buildings was to provide a place where the different French “Pagodas,” or Vietnamese Buddhist centers in France, could gather, and especially to host the biannual retreats that drew hundreds of members from all over Europe. Vietnamese Buddhism has three main strains, she explained: Pure Land (based on the practice of Amitabha), Zen, and Tantric. Though the founding lama belonged to the first tradition, he also felt a strong connection to Tibetan Buddhism. This perhaps explains why above the large central Buddha resting in meditation posture, (consecrated by HH the Dalai Lama in 2008), a lotus is carved into the center of the canopy; the Tibetan letters on its petals spell out the six-syllable mantra of Avalokiteshvara, and in the center is his seed syllable HRIH.

This main hall has a curving high roof of wood, reminiscent of temples in Vietnam, and a huge bell and a large, double-sided drum. Preparing for the Karmapa’s arrival, the bell was struck with a log of wood, rhythmically swinging back and forth, and the drum was forcefully struck from both sides while the Vietnamese lamas chanted in their special way of circling around a tone.

The Karmapa entered the temple led by a nun carrying a wooden tray with a delicate bouquet of flowers and billowing sticks of incense in a ceramic bowl. Following Vietnamese tradition, the Karmapa kneeled in front of the golden Buddha to offer incense. Then standing he blessed the statue with a white rose dipped into consecrated water.

Taking his seat on an elegant carved chair, the Karmapa was welcomed by the main organizer, Titi Tran, who told of their happiness in being able to receive him on his first visit to France. The senior monk expressed, “our deepest gratitude for your great compassion in coming to Europe to create a true and wholesome Dharma.” He called the Karmapa one of the “precious leaders of the twenty-first century” and asked him to teach and spread the genuine Dharma in the West.

The Karmapa opened his remarks by saying how pleased he was to come for the first time to a Vietnamese Buddhist temple and to make this connection. In India, he remarked, many Vietnamese have come to visit him and make a Dharma connection. He had also studied for a while the Vietnamese language, he said, and hoped to come to Vietnam in the future to deepen his relation to the country and its people.

To create an auspicious connection, the Karmapa gave the transmission of an Avalokiteshvara practice along with his mantra, creating a beautiful connection with the mantra above the Buddha statue in the temple. The Karmapa aspired that everyone would realize Avalokiteshvara and bring others to that level. He explained that Avalokiteshvara embodies the compassion of all the buddhas, and given all the difficult situations in the world today, it is important that our hopes and enthusiasm do not diminish. For this reason, he gave the empowerment and prayed that a deep compassion would take birth within us and expand. With this he closed his remarks, thanking everyone for their warm welcome and hoping to return to the temple in the future.

In his closing remarks, the head monk made the aspiration that the Tibetans would be able to preserve their spiritual and cultural traditions and find liberty and peace. For the world, he aspired that the teachings of the Buddha would spread and bring peace and relief from suffering.

The nun carrying the tray of flowers and incense led the way out of the shrine hall to another shrine behind the main one, where an image of the founder is kept along with photographs of others who have passed away. Circling around on his path back into the temple, the Karmapa passed a table with a disciple’s statues of Marpa, Milarepa, and Gampopa, the main progenitors of the Karmapa’s lineage in Tibet, thus making a good connection for the future. After tea with the monks, the Karmapa returned to his hotel in Paris.