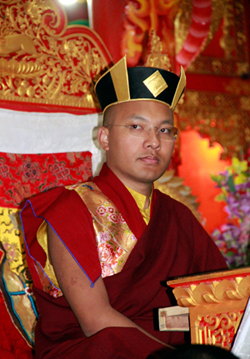 According to the Tibetan calendar this is now the Year of the Iron Rabbit.
The Gyalwang Karmapa celebrated Tibetan New Year in the company of his tutor, Khenchen Yongzin Thrangu Rinpoche, and Dzogchen Ponlop Rinpoche, who is currently visiting from the U.S.A.

Preceded by an incense bearer and monks playing the gyalin [Tibetan trumpet] His Holiness arrived in the main shrine room at Vajra Vidya Institute shortly before 7.00am, splendidly attired in gold brocade tonka and wearing traditional Tibetan white felt boots for the occasion. He mounted the throne, carefully donned his black-and-gold activity crown, and the ceremony to welcome in the new year began.

First came the presentation of traditional Tibetan white silk scarves called katag and gifts. A long line formed led by the monks, then the nuns and finally the laypeople, snaking around the shrine room, in order to offer katags to the Gyalwang Karmapa, to Khenchen Thrangu Rinpoche, to Dzogchen Ponlop Rinpoche, to the great golden image of Lord Buddh, and to the Dalai Lama’s throne.

The ceremony continued with traditional New Year prayers, during which bowls of delicious sweet rice– a rich mix of saffron boiled rice, butter, cocunut, sultanas, almonds and droma, a small black-brown tuber fromTibet– were served with salty Tibetan butter tea. Various sponsors made offerings of money to the sangha, and no one was allowed to go home empty-handed as each guest received a bag of traditional Losar offerings–kabsey [fried Tibetan biscuits], fruit, soft drinks, biscuits and sweets.

Afterwards, sheltered from the sun in a tented pavilion and flanked by Thrangu Rinpoche and Dzogchen Ponlop Rinpoche, His Holiness attended a small function on the lawn outside the main temple.

There were short speeches, songs of praise, and prayers for the long lives of His Holiness the Dalai Lama and the Gyalwang Karmapa. Older students of Namo Buddha Branch School adeptly performed a short Cham dance. Younger students competed in several hilarious events –hopping around on one leg in a ‘cock fight’ competition, racing against each other in a marble and spoon race, coughing and spluttering their way to find the coin in the plate of tsampa, and a tug-of-war which lasted all of ten seconds. The audience roared with laughter at their antics.

But the most popular event, as last year, was the older students’ lion dance. The four young men in the two snowlion costumes performed the most expertly co-ordinated dance routines, combined at times with amazing acrobatics and great humour. Their skilfull performance made the snowlions come to life, shaking their heads and manes, bouncing and flopping over the lawn, bowing, sitting, standing, rolling on their backs, and cheekily winking their eyes.

On the third day of Losar His Holiness Karmapa had lunch at the Ramada Hotel hosted by Vajra Vidhya Institue. Khenchen Yongzin Thrangu Rinpoche, Dzogchen Ponlop Rinpoche and the entourage of His Holiness were invited for the Lunch.
Later at evening His Holiness performed a special Guang Gong Puja in the evening outside in front of Vajra Vidya Monastery’s main shrine hall. Khenchen Yongzin Thrangu Rinpoche and Dzogchen Ponlop Rinpoche attended the prayers. The evening concluded with a burst of fireworks.