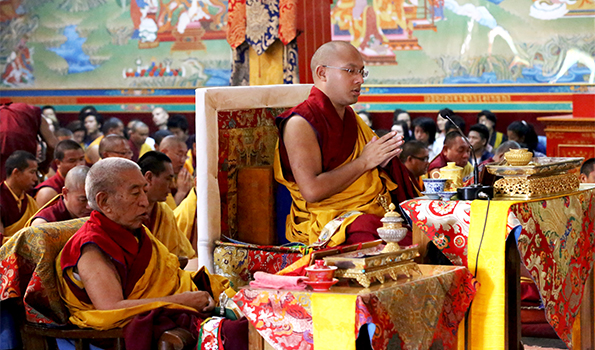 After resting well for the past few weeks, in a sign of his steadily improving health the Gyalwang Karmapa presided over the first session of an annual Milarepa puja at Vajra Vidya Monastery.

The day marked the parinirvana anniversary of Milarepa, Tibet’s most celebrated cave-dwelling yogi, and one of the most important Kagyu lineage masters. His extraordinary life, famously spent meditating in remote caves and composing spontaneous songs of realization, continues to inspire practitioners to this day.

At around 8.30am, golden statues of the Kagyu founding masters Milarepa, his teacher Marpa, and his disciple Gampopa—together known as ‘Mar Mi Dag Sum’—were led in a procession around the shrine hall. A long, slow-moving line of monks, nuns and laypeople followed behind the statues as they completed a single circumambulation.

The Gyalwang Karmapa then entered the shrine hall, accompanied by Kyabje Khenchen Thrangu Rinpoche, and took his seat facing the same direction as the gathered sangha. With the sangha arrayed behind him, including students from the nearby Central University for Tibetan Studies, the Gyalwang Karmapa led those gathered through the sacred Milarepa guru yoga puja.

After the session the Gyalwang Karmapa retired to take further rest, on his doctor’s orders, while the rest of the day’s activities continued. They included a lunch feast for all, Milarepa ganachakra tsog offering, and afternoon tea offered by the Kagyu Relief and Protection Committee from the Central University for Tibetan Studies.