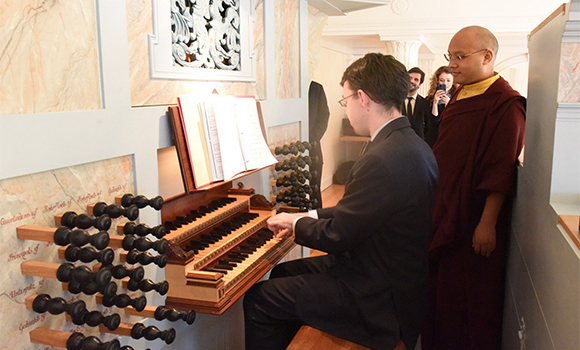 (April 9, 2015 – New Haven, Connecticut) “Your presence here enriches the quality of our worship,” the Dean of Yale Divinity School, Gregory Sterling, told His Holiness the Karmapa as he welcomed him to the university’s Institute of Sacred Music (ISM). The Institute of Sacred Music arranged a private concert for the Karmapa, himself both a performer and a composer of sacred music in his own Buddhist tradition.

Exploring his interest in the music of other traditions is beginning to emerge as an additional theme of this university-centered trip, as His Holiness the Karmapa had operatic voice lessons in Redlands, heard a special arrangement of one of his own songs performed by a 26-person chorus and attended a spiritual open mic night at Princeton. On his last trip abroad to Germany, His Holiness had also attended vespers service at one of the country’s oldest Benedictine monasteries, where he shared in their chanting during worship.

Several exceptionally talented students of the institute performed for His Holiness the Karmapa, showcasing Baroque voice and organ music from 17th-century Europe. The powerful soprano voice of Nola Richardson held her audience perfectly still as she sang a lament in Latin, accompanied by Ignacio Prego on harpsichord. Wyatt Smith performed two pieces on Yale’s Krigbaum pipe organ, which was tuned in meantone temperament, as were many organs used in the 17th century, the same period when the pieces he played were composed.

After the final reverberations of the lower pedals of the organ through the chapel had given way to the sound of applause from the small private audience, His Holiness expressed his interest in viewing the pipe organ up close. The party proceeded upstairs, where the Karmapa examined the workings of the complex instrument and had a private demonstration of the principles of organ playing. His curiosity satisfied—at least for now—His Holiness made his way out of the building and on to his next activity on this rich a