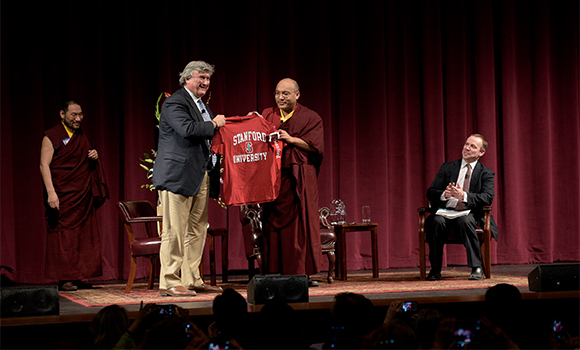 (March 17, 2015 – Palo Alto, California, USA) After spending the day at Stanford campus, meeting with both students and faculty, His Holiness the Karmapa delivered a lecture on the theme of ‘Caring Connections: Compassion, Technology and the Environment.’

Hours before his arrival, devotes fortunate enough to have obtained one of the tickets set aside for the general public were lined up outside, hopeful of securing a favorable seat in the auditorium. Members of the local Tibetan community stood outside in anticipation of his arrival, eager to catch a glimpse of His Holiness as he arrived.

Stanford had released tickets without prior announcement, yet even so within a single day all had been distributed to the public. The lecture was held at the university’s Memorial Hall to a sold-out gathering of 1,700 students, faculty and alumni. The event was livestreamed by Stanford University, and another 3,000 people watched online. Simultaneous translation was provided.

The Karmapa’s talk on the theme of ‘Caring Connections: Compassion, Technology and the Environment’ was co-hosted by Stanford University’s Center for Compassion and Altruism Research and Education, and Massachusetts Institute of Technology’s Dalai Lama Center for Ethics and Transformative Values.

Dr. James Doty, Director of the Center for Compassion and Altruism Research and Education at Stanford, set the context for the evening by describing the scientific research that links compassionate behavior with profound physiological effects, such as lower blood pressure, boosted immune system, and increased longevity and calmness.

Next, Venerable Tenzin Priyadarshi, founder and director of the Dalai Lama Centre for Ethics and Transformative Values at MIT, gave a brief biography of His Holiness the Karmapa, before inviting him to the stage as “a teacher to the world.”

“Although this is my third visit to the USA,” the Karmapa began, “it’s my first opportunity to have an extended visit to any foreign country, and I feel this is a special opportunity for me in my life. At the beginning of this tour I have an appreciation of great freedom, and I feel that this tour marks a significant step into the future for me.”

His Holiness then began to explore the term ‘compassion’ and what it means on a personal level. The Karmapa shared some of his treasured childhood memories with the audience, showing just how deeply compassion was woven into his own Tibetan upbringing.

“I think the environment I was raised in by my parents was an environment of great compassion. Part of this was just the closeness we all shared with each other in our physical space. My whole family lived inside a tent made of yak hair, all in the same room together. You could call it the living room, you could call it the kitchen—it was just one room,” he described.

“What I remember in that very close space together with my family is the sound, every morning, of my parents making prayers, expressing sentiments such as may all sentient beings be happy, may all sentient beings be free of suffering. Then again I would fall asleep to the sounds of similar aspirations in the evening. In this way I really feel that I was raised in a mandala or a circle of compassion and love.”

The Karmapa then explained that compassion is tightly woven with the reality of interdependence that we all share.

“I think all of us have our own individual understanding of what the term ‘compassion’ means. But I think if we called compassion by another name, we could say it’s all about developing a sense of responsibility in relation to the reality of interdependence,” he said.

“When we look at the way things happen in real life, we can see that many problems arise in the context of issues such as the environment, gender inequality, and so on, because we don’t have an appreciation of the interdependent nature of reality. Instead, perhaps unknowingly, we adopt a default attitude of selfishness, basically only cherishing our own concerns. We can see that this is the root of many of these problems.”

The Karmapa drew examples from everyday life to demonstrate the powerful reality of interdependence between beings and the natural world we depend on.

“We can especially see how this phenomenon of interdependence plays out in the context of technology. We’re seeing rapid advancements in technology, and as humans we’re also coming to depend more on technological advancements and placing even more of our hopes in technology. But technology is something that constantly requires updates and improvements, and that constant flow of updates and improvements in turn depends on a great array of natural resources,” the Karmapa pointed out.

“But we only see what we have in our hands when it comes to technology. We only see, for example, the new iPhone that we’ve acquired or that we want to acquire—we don’t see directly with our own eyes all the natural resources and all the human hardships that went into the production of that iPhone. Our attention tends to remain just at the surface with what we can see with our own eyes, even though all the information about what went into the production of the iPhone is available to us. We’re not looking at the longer or larger picture of where this is all coming from.”

His Holiness used another powerful, everyday example to illustrate our interconnectedness and the common ground we all share of wanting to be happy and not wanting to suffer.

“We may wear clothes here in the US, but most of those clothes aren’t made in the US,” he said. “They’re made in other countries, often developing countries. So developing compassion might involve giving rise to greater awareness of the conditions in the factories where our clothes are made and the hardships the people who work at those factories might endure. Compassion might involve giving rise to greater awareness about their difficult situation, in contrast to the pleasant situation we enjoy. With the purchase of clothing it seems that we get the good stuff, and they get the bad stuff. We get the good times, and they get the hard times.”

Rather than merely sitting back and observing the situation, the Karmapa explained that our compassion also needs to be active and involved.

“We can also see how sometimes we separate ourselves from the suffering of the world by regarding it as a show that we’re sitting back and watching,” he said. “For example, we might become aware of the suffering and difficulties that are happening in the Middle East. But we’re just kind of sitting back and observing as if it were a show to take in, not really involving ourselves by taking action or becoming more dedicated toward that situation.

“Compassion means becoming more involved, taking more action, developing more dedication. And that means we need to take more risks. But our habit as human beings is that very few people seem to enjoy taking risks. We tend to be more comfortable in our habitual zone of having things be easy and smooth for us.

“Although we appear to be separate from others, we’re actually very close,” the Karmapa said. “The modern world is bringing that reality even more into the fore – our world is becoming smaller and we’re becoming even closer to everyone else we share the planet with. We’re sharing others’ experiences of happiness and suffering even more.”

Dr. Doty then returned to the stage prepared with several important and topical questions, eager to seek His Holiness’s insight. He began by asking the Karmapa when he had realized the critical urgency of protecting the environment.

The Karmapa explained that his deep appreciation for the environment began in his early childhood in an isolated part of Tibet, where people lived a traditional lifestyle very close to nature.

“At that time the area where we lived was very pristine, unpolluted, not affected by a lot of development at all,” he related. “So I feel that was a precious opportunity for me to make a very direct and immediate connection with how beautiful the natural world is and to really appreciate it. It’s now been 15 years or so since I left Tibet and I’ve learned more about what’s happening to the environment there. For example, the ice and snow are rapidly melting with big impacts on the environment. So that was really what gave rise to a natural desire to help. Sometimes the sad thought occurs to me that if I were to return to Tibet maybe things would no longer be as beautiful as I remember.”

When Dr. Doty then asked him how to positively influence the growth of our children with environmental awareness and developing compassion in an age of technology, the Karmapa shared his own parents’ wisdom.

“When I was young of course there was not much technology to partake of, and most of my toys were made of either dust or stone or wood. We didn’t have these devices with keyboards that you play with your thumbs. But the one thing that I do remember is the example my parents set, particularly with regard to the lives of other creatures. They really regarded every life as significant and precious and we were taught to protect even little insects, and to be careful when we were walking around so that we wouldn’t squish them. I feel that that was a very positive influence,” he shared.

“So regarding children today, I feel that one of the most important things is for the parents themselves to try to practice compassion, and to improve their compassion. And if they’re able to do that then this will definitely have a natural, strong and positive influence on their children. I think it is very important if those of us who are parents can take an attitude of responsibility for future generations as part of our reason for developing compassion.”

Dr. Doty then returned to the theme of active compassion, and the fear that prevents many people from standing up for others who are suffering. Asking His Holiness the Karmapa’s advice, he lamented that many people don’t act because they are afraid of what might happen to themselves—which is a great difficulty witnessed throughout human history.

“A good example of what your question points to is the oppression that many Tibetans are facing and enduring,” the Karmapa responded. “A lot of people don’t want to get involved with that issue and they kind of shove it off to the side because they feel it would be so difficult for them to become involved—very difficult politics, it’s a very difficult situation, which seems intractable, and so forth.

“But I think that if we approach it from the point of view of skillful means and really think about what methods are most skillful for us to engage with, then more avenues of becoming involved can open up for us. Some people might say, I don’t want to be political and that’s a political issue. But actually it’s not just a political issue. It’s a spiritual issue, it’s a cultural issue, and it’s an environmental issue as well.”

Thanking His Holiness for his comments, Dr. Doty then gifted the Karmapa a Stanford T-shirt and pendant, among other gifts, while His Holiness in return presented him a personally signed Chenrezig thangka.

By the end of the lecture, this Silicon Valley-crowd had generated a steady stream of joyful tweets with photos of His Holiness the Karmapa. Even after he had exited the stage, the audience lingered on, reconnecting with friends an clearly reluctant to admit that the evening with the Karmapa was truly ending.

For those who were not present at the lecture, Stanford will be uploading the video on its page, and a link will be provided here once it does.