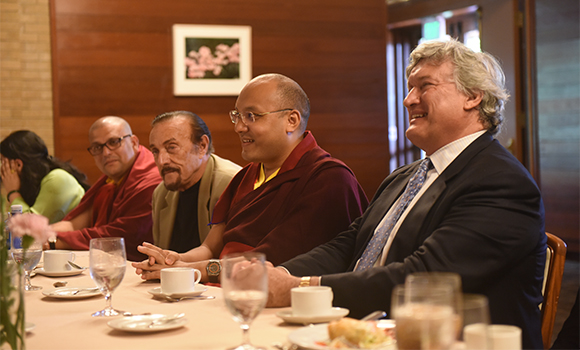 (March 16 & 17, 2015 – Palo Alto, California USA) Right from the first day of his stay at Stanford University, His Holiness the Karmapa began working to fulfill two major aims of this tour and its focus on universities—connecting with young people and interacting with important thinkers on topics of mutual concern.

His first major meeting took the form of an informal lunchtime exchange with seven faculty members from the neuroscience and psychology departments of various universities in the Bay Area. The conversation ranged from emotional intelligence to neurological research to the methods for measuring whether or not compassion was increasing in an individual. Participating in the discussions were Dr. Philip Zimbardo, psychologist and renowned creator of the Stanford Prison Experiment, Dr. Erika Rosenberg, Consulting Scientist and the Center for Mind and Brain, UC-Davis, Dr. Philippe Goldin, Assistant Professor at UC-Davis School of Nursing, Dr. Yotam Heineberg, Clinical Instructor and founder of the Compassion Training Initiative at Palo Alto University, Dr. Brian Knutson, Associate Professor, Stanford Psychology & Neuroscience, Dr. Jeanne Tsai, Associate Professor, Stanford Psychology and Dr. Daniel Martin, Associate Professor, California State University – East Bay. Most are collaborators in the research and training offered by Stanford University’s Center for Compassion and Altruism Research and Education (CCARE), which hosted the lunch.

One question posed by the Karmapa—which emotion was considered most harmful or negative in psychological thinking—led to a lively debate among the faculty present, with some arguing that shame was most harmful and others favoring jealousy or anger. This led to a discussion of the role of cultural differences in the experience and manifestation of emotional states.

Throughout, His Holiness the Karmapa stressed that he saw himself as a student in the interactions, and indeed more often posed questions than fielded them. Nevertheless, it was clear that the 17th Karmapa is ready to lend his voice to significant conversations taking place in scholarly communities of the West, and to join forces in order to further mutual research interests.

In the afternoon of March 16th, His Holiness had a private meeting with Dr. Paul Harrison, George Edwin Burnell Professor of Religious Studies at Stanford University and co-director of its Ho Center for Buddhist Studies. With the aim of encouraging and facilitating deeper study of the Tibetan canonical collection of the Buddha’s discourses (Tibetan: Kangyur), His Holiness the Karmapa has created a long-term project to make that collection available electronically. Under his direction, a large team of learned monks, or khenpos, have been inputting and ensuring data quality, while software engineers have been designing the database and applications to make that access to that data most useful for scholars.
During their meeting, His Holiness the Karmapa demonstrated the application, called Adarsha, to Professor Harrison and solicited his suggestions for improvement or for additional functionality that he would find useful as a scholar.

“The CBETA [Chinese Buddhist Electronic Text Association] revolutionized study of the Chinese canon,” said Professor Harrison, “and I believe that this [Adarsha] project will revolutionize our study of the Tibetan canon.”

The shared passion for canonical research was palpable as the two exchanged copies of rare texts and research articles and enthusiastically shared ideas for manuscript collections to be explored. The 17th Karmapa and Professor Harrison discussed the history of the canon collections and identified recensions of Kangyur editions that should be integrated into subsequent phases of the Adarsha project.

Later, the Ho Center for Buddhist Studies hosted a farewell reception for His Holiness the Karmapa at the conclusion of his visit to the university. During the reception, His Holiness spoke to those assembled, which included Professor Harrison as well as Dr. John Kieschnick who shares with the 17th Karmapa a research interest in the history of monastic robe designs.

“I firmly believe that collaboration between scholars of Buddhists studies and leaders of Buddhist communities will bring forth strong positive results for Buddhism in the future,” the Karmapa told them. “I feel that we are taking an important joint step here. I hope that we can continue meeting to explore the possibilities for working together. You have accomplished wonderful things already and are continuing to do wonderful work, and I really rejoice in that.”