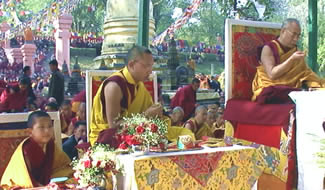 His Holiness celebrated Losar, the Tibetan New Year of the Water Sheep, in Sarnath on February 2, 2003. The February celebration recognized New Year according to the Tsurphu calendar, which is the tradition of calendar calculation first developed by the Third Karmapa and maintained by the Kagyu lineage. (The two main Tibetan calendar calculating traditions are explained in more detail here; usually the New Year for both calendars coincide, but this year were separated by one month, as occasionally happens.)

February 16th was the first full moon after the New Year, as well as the anniversaries of the performance of miracles by Sakyamuni Buddha and of the parinirvana of Marpa Lotsawa. The Karmapa observed these important events by leading ceremonies at the stupa in Sarnath where the Buddha first turned the Wheel of Dharma.