The Great Monlam Aspiration of the Glorious Unequaled Kagyu Sangha 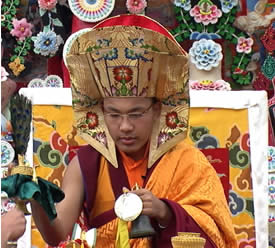 In January, 2003, HH The 17th Gyalwang Karmapa presided over the conclusion of the Pal Nyammay Kagyupay Sangha Monlam Chenmo, “The Great Monlam Aspiration of the Glorious Unequaled Kagyu Sangha.” The gathering of Kagyu monks from all over the world takes place annually at the Mahabodhi Temple Complex in Bodhgaya, India, under the Bodhi tree, the site where the Buddha attained enlightenment. The purpose of the Monlam is to bring peace to the world and to increase happiness and wisdom for everyone.

His Holiness arrived in New Delhi on January 4th and Bodhgaya on the evening of the January 5th. He joined the Monlam on the 6th and in the afternoon conferred a Tara empowerment. On the 7th, the Monlam was graced by the presence of His Holiness the Dalai Lama, who joined the Karmapa under the Bodhi Tree for the concluding session. The Karmapa performed Tsok offerings and prayers, and joined His Holiness the Dalai Lama in extending great blessings, prayers and aspirations for an end to all suffering and that all beings without exception may quickly attain peace and enlightenment.

This was the second year in which His Holiness has presided over the Great Kagyu Monlam ceremonies. After the Monlam, His Holiness Karmapa left for Varanasi, where he will maintained a regular schedule while in residence for a few days at the Vajra Vidhya Institute, the monastery of the Venerable Thrangu Rinpoche, the Karmapa’s main tutor.

From January 14-20, His Holiness returned to Bodhgaya to receive The Kalachakra (“Great Wheel of Time”) Abhisheka from His Holiness the Dalai Lama. While there, the Karmapa held blessing audiences each day for the public. Many thousands of participants received blessings. The Karmapa also visited other sacred sites in Bodhgaya, such as the Buddhist temples representing Thailand, Japan, Taiwan and Bhutan. Many persons attending the Kalachakra visited His Holiness in Bodhgaya, including high-ranking officials from Bhutan and many ordinary persons.