‘I Express Myself Through Art’, The Gyalwang Karmapa Tells US Students 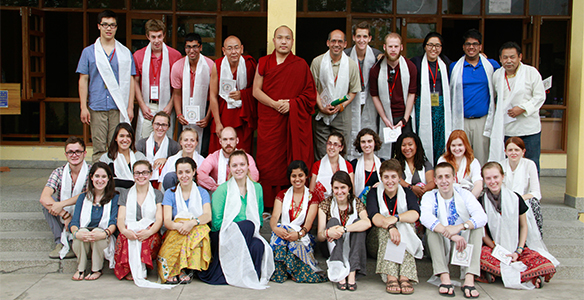 When a group of students from Emory University in the United States recently visited the Gyalwang Karmapa, he spoke candidly with them about his life.

The group of around 26 students, led by Geshe Lobsang Tenzin, travelled to Gyuto Monastery during an annual study-abroad program, and spent about an hour with the Gyalwang Karmapa.

When asked by one student about the role of art in his life, the Gyalwang Karmapa responded,

“There could be a number of reasons why art is important, and it’s not necessarily important to everyone for the same reason. In my case, when the environment around me seems to be quite restricting, which happens to be often, and I feel the need to vent out this feeling of restriction that I’m bound by, then I want to put my feelings of creativity or imagination on paper or canvas and nobody’s trying to restrict me from doing that. For me art is a very important way to express myself under such circumstances, to have an outlet for my creative energy.”

When another student asked him what it was like to be the Karmapa, the spiritual leader replied with characteristic humility.

“When I was very little, there were supposed to be a lot of special signs or indications which, according to tradition, foretold the birth of a special being. But personally I like to think of myself as a normal person, a normal human being. At least that’s what I like to think of myself. Maybe due to circumstances, a normal human being with some sort of special angle or touch to it.”

The focus of the discussion then shifted to the environment, a topic close to the Gyalwang Karmapa’s own heart. He is renown for his environmental activities  and deep commitment to protecting the natural world.

“What experiences inspired Your Holiness to become interested in environmental activism?” a student asked.

The Gyalwang Karmapa recalled his nomadic childhood in a remote part of Tibet, where there was very little modern development. “I had the opportunity to be close to nature,” he said. “I had a deep experience of natural beauty, and the important role of nature in our lives. Maybe for that reason I feel a close affinity with nature and cherish the environment.”

The Gyalwang Karmapa ended his discussion with the students by pointing out the play of interdependence in our environment.

“We need to recognize that our environment, this very world, sustains us all. Our own life, and all of existence. Everything occurs in the context of interdependence,” he told the students.