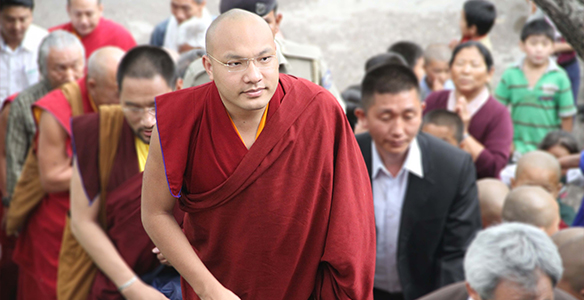 The Gyalwang Karmapa graced the annual Tibetan Children’s Village (TCV) ‘Inter-House Cultural Competition’ as guest of honor on the evening of 28 May. He watched with enjoyment as the students showcased the richness of Tibetan culture through song and dance, in a friendly performance competition between the school’s four houses (Nyatri, Trisong, Songtsen and Triral). Adorned in vibrant costumes and hats from different regions of Tibet, the students offered their performances.

The Gyalwang Karmapa warmly thanked the students for their presentation of Tibetan culture, adding that he enjoyed the show a lot.

“During the Cultural Revolution almost 80-90% of Tibetan cultural artifacts were destroyed,” he told those gathered. “All those things that were destroyed, including precious documents, texts and objects, were things which had lots of history, and we cannot get them back. This is a very great loss, and I feel very saddened. It’s the loss of a very precious thing. Some people said to me that the Cultural Revolution was worse than losing Tibetan freedom, because with Tibetan freedom we can struggle and we have the possibility to get it back. So it’s very important to preserve our ancestral culture, because once it’s lost it’s very difficult to bring it back.”

Highlighting the role of songs, dance, opera and traditional dress, the Gyalwang Karmapa urged each of the students to help preserve Tibetan culture. “Right now we have all the opportunities and conditions to preserve our own religion and culture, and we have to do it. For example, in our songs and dances we can clearly see our ancestors’ way of life and how their religion and devotion were a part of their life. Not only that, these songs and dances also show the traditional dress, and the Tibetan environment, and how our ancestors lived in such an environment. All these things are included in our songs and dances, so it’s very important to preserve this culture.”

“The Tibetan situation is very fragile right now,” the Gyalwang Karmapa told the students. “Individually you have to take your own responsibility and decisions in order to preserve Tibetan culture and traditions, according to the wishes of His Holiness the Dalai Lama.”

Special guests at the event included Members of Parliament, officials from the Central Tibetan Administration, and the heads of local TCVs. Around 1000 students also filled the hall to watch the cultural competition. As the evening drew to a close the Gyalwang Karmapa presented prizes to the winning performers, as well as khatas to the event’s organizers.

Earlier in the day, Kyabje Tai Situ Rinpoche had also paid a visit to the Gyalwang Karmapa at his residence, where the two masters enjoyed lunch together.