His Holiness the Karmapa in Washington DC 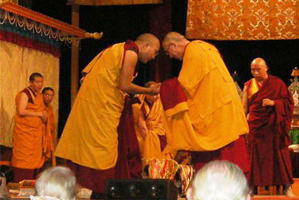 Saturday morning, before a World Peace talk took place on the West Lawn of the Capitol Building in Washington, D.C., the 17th Gyalwang Karmapa, stood silently on the stage, waiting to greet the 14th Dalai Lama. This was the Karmapa’s first public appearance since arriving in the nation’s capitol the night before. While thousands of people had come to hear the Dalai Lama’s talk on the importance of cultivating inner and outer peace, fewer seemed cognizant of the young Karmapa, waiting quietly in the wings. When the Dalai Lama made his entrance, the Karmapa walked forward, and the two bowed gently towards each other in a Tibetan gesture of mutual respect and affection, two great Tibetan spiritual leaders on a world stage, with the Washington Monument behind them and the U.S. Capitol in front.

The 17th Gyalwang Karmapa is in Washington D.C. to attend the Kalachakra teachings and empowerments that the Dalai Lama is giving at the Verizon Center through July 16th. On Wednesday, Kalden Lodoe, the President of the Capital Area Tibetan Association remarked: “This is the first time that His Holiness Dalai Lama is giving the Kalachakra in Washington, D.C. There are attendees from 41 countries and five continents.”

After the Kalachakra empowerment is over, the Karmapa will visit his centers in New York and New Jersey before returning to India towards the end of July. While the 16th Karmapa, Rangjung Rigpe Dorje travelled widely in North America in the 1970s, this is only the second time that the 17th Karmapa has visited the United States since escaping from Tibet to India in 2000.