His Holiness the Karmapa attended a reception hosted by the Special Envoy of His Holiness the Dalai Lama, Loday Gyari Rinpoche, and attended by Professor Venerable Samdhong Rinpoche, the Kalon Tripa-elect Lobsang Sangay, and board members of the International Campaign for Tibet, including Richard Gere. The reception, hosted in honor of Samdhong Rinpoche, was well attended. Gyari Rinpoche toasted him and lauded his achievements and his deep dedication towards the Tibetan people and, in particular, thanked him for his commitment to leading the Tibetan community towards democracy. 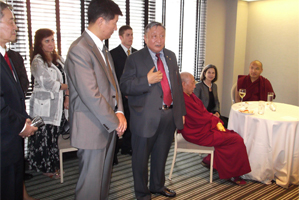