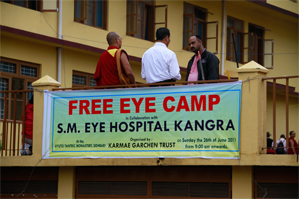 This year in accordance with the wishes of His Holiness The Gyalwang Karmapa, a set of special practices was announced for the recollection of the kindness of the two Heart sons Kenting Tai Situ Rinpoche and  Goshir Gyaltsab Rinpoche and prayers were offered as well for their well being and long life.

Tsurphu Labrang has performed 5 of the practices on the occasion of His Holiness’ 26th birthday celebration.  A weeklong prayer of Dorje Drolo and Tsedup was performed for the long life of His Holiness Dalai Lama,  the Gyalwang Karmapa, and  especially for the two heart sons. http://longlifeaccumulations.com/

In the morning of 26th June,   members of the Tsurphu Labrang  (Karmapa’s Office of Administration)  offered  birthday wishes and long life prayers to  His Holiness.  Creating further auspicious conditions to that end, the Karmae Garchen Trust and the Tsurphu Labrang  jointly organized  a free eye camp here at Gyuto Monastery, the  temporary residence of His Holiness the Karmapa.

On this occasion Tsurphu Labrang also distributed gifts and school stationeries to more than 500 children from 11 schools within and around  Siddhibari, lower Dharamsala.

Further commemorating His Holiness’ birthday, the Office of Administration published a new edition of Layjang, a quarterly Tibetan-language bulletin containing teachings, poetry and other compositions by His Holiness.

In Rumtek Monastery, Sikkim the main seat of  His Holiness,  the 26th Birthday celebration according to western calendar was celebrated on a grand scale by all the Monks and lay community of Dharma Chakra Centre. The birthday celebration commenced from 6 am with Sang-sol and hosting of prayers flags. Later at 9:00 am mandala offerings and prayers for His Holiness’es  Long Life were made which included prayers for the gratitude of beloved mother (Ma Dri-lan Shak-do by 3rd Karmapa) .

Ven Dropon Dechen Rinpoche inaugurated Tso-Jey Medicial Clinic at the Dharma Chakra Center  in the presence of Chief Guest Phetuk Tsering Bhutia Sangha MLA (Member of Legislative Assemblyfor Ecclesiastical Affairs ) Govt of Sikkim. The Tso Jey Clinic has been established as a special charitable activity to provide free medical care and needs for the community at the Dharma Chakra Center and for the people of nearby villages. 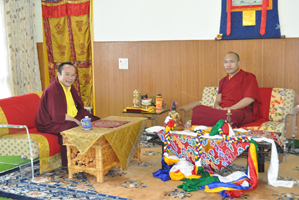 Rumtek Monastery also organized a free medical check up and free distribution of medicines in both Western and Tibetan tradition and also gave donation to Bal Niketan School at Tadong which provides care and welfare for orphaned children. Finally the  Cake cutting and cultural shows highlighted the celebration.

The Vajra Vidya Institute in Sarnath, Varanasi celebrated His Holiness’ 26th birthday by releasing  70,000 fishes  in the Ganga River in Varanasi.

In Nepal, Tsurphu Labrang organized  a program for white washing the great Stupas of Boudhanath, Swayambu and Namo Buddha on the occasion of His Holiness’ birthday and as part of long life accumulation.