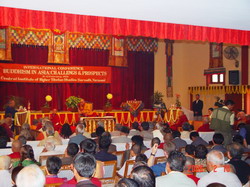 The Karmapa and Dalai Lama are among the attendees at the International Conference on Buddhism in Asia on February 10, 2006

The conference was officiated by HH Dalai Lama and featured two scholars from each of the four main lineages of Tibetan Buddhism: the Nyingma, Kagyu, Sakya, and Geluk lineages, who were to present the views of their respective lineages. The morning session opened with a speech by HH Dalai Lama, which was followed by presentations by Geshe Lobsang Tenzin, a Geluk scholar from Sera monastery, Prof. Yeshi Thabkhe, and Khenpo Gyamtso, a Sakya scholar from the Sakya College.

His Holiness attended lunch with HH the Dalai Lama, along with Kyabje Thrangu Rinpoche, and His Holiness’s sister Ngodub Pelzom.

The afternoon session started around 1:30pm. A the request of His Holiness Dalai Lama, His Holiness Karmapa shared his views on the Great Lineages in opening remarks to the gathering. His remarks were followed by presentations by Nyingma Khenpo Yeshe Dorje from Namdroling Monastery and Khenpo Gawang and Khenpo Tsultrim Norbu, from Rumtek and Sherab Ling, respectively. His Holiness later returned to the Vajra Vidya Institute where he gave a teaching on refuge to Western students.

On 10th February 2006, His Holiness Karmapa attended the opening ceremonies of a three-day international conference entitled “Buddhism in Asia: Challenges and Prospects,” which conference was also held at the Central Institute for Higher Tibetan Studies. The event featured an inaugural address by H.H. Dalai Lama, as well as auspicious prayers, and welcome and keynote addresses. Following H.H. the Dalai Lama’s address, His Holiness enjoyed refreshments with H.H. Dalai Lama and the conference participants on the grounds of the Central Institute. Following this, the Karmapa returned to the Vajra Vidya Institute. – Karma Woser Rabten