14th January, 2008: The Gyalwang Karmapa gave talk and audience, as pre requested by the Kagyu students of Central Institute for Higher Tibetan Studies (CIHTS)at Vajra Vidhya in Saranath. The Khenpo of CIHTS offered madala to His Holiness. The Gyalwang Karmapa visits the sacred sites of Sarnath

15th January, 2008: The Gyalwang Karmapa visited the sacred sites of Sarnath, where our Teacher the complete and perfect Buddha turned the Wheel of Dharma. His Holiness first led Khenchen Yongzin Thrangu Rinpoche and the monks of the Vajra Vidya Institute in monlam prayer service at the Dhamekh Stupa. The service included mandala offering to the Buddha, the Aspiration for Noble Conduct and other prayers, and concluded with a feast offering. In addition to the sangha, many faithful devotees from Tibet, Bhutan, other Himalayan regions and foreign countries participated in the service. His Holiness circumambulated the stupa. After that His Holiness visited the Mulagandi Kuti Vihara, escorted into the temple by Ven. Sumedha Thero of the Mahabodhi Society of India. The Gyalwang Karmapa Visits the Central Institute for Higher Tibetan Studies. 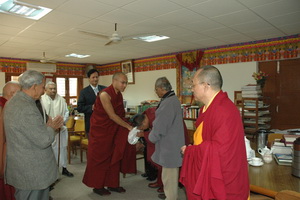 His Holiness at the Central Institute of Tibetan Studies, Samprunant University, Varanasi, India

16 January, 2008: The Gyalwang Karmapa visited the Central Institute for Higher Tibetan Studies in Sarnath. The director, Prof. Geshe Ngawang Samten, who escorted him into the assembly hall, greeted him. The director, faculty, workers, and exchange students from abroad offered His Holiness khatas. The director then made some welcoming remarks, after which His Holiness gave a talk. His Holiness talked about how the Central Institute was founded by His Holiness the Dalai Lama. At that time, the situation for Tibetan refugees was very difficult and there were many uncertainties and also talked about how the students at the Central Institute are exposed to all four major Buddhist traditions and the Bon tradition. Appreciated the opportunity to study of all the Buddhism while it is important to study own tradition, This will help foster good communication between the traditions and help everyone deepen their understanding as well. His Holiness then spoke about the importance of studying Sanskrit. The source of the Buddhist teachings in Tibet is the Sanskrit scriptures, so it is very important to understand the language and study those scriptures in detail. By doing so, we can come closer to the origin of Tibetan Buddhism. Geshe Dradul then translated a summary of the remarks into English, and Geshe Yeshe Tabkhe made concluding remarks summarizing His Holiness main points and thanking him for coming. His Holiness returned to the Vajra Vidya Institute, where he took his lunch with Khenchen Thrangu Rinpoche before departing for Delhi. 16th Jan 2008, The Gyalwang Karmapa arrived in New Delhi at 5:30 pm. and stayed at Radisson Hotel. His Eminence Tai Situ Rinpoche met His Holiness at the hotel and had dinner thereafter.

17th Jan, 2008: Kugnoe Kalon Tenpa Tsering la had private audience with His Holiness in the afternoon at Radisson hotel.

18th Jan 2008: The Gyalwang Karmapa left for Dharamsala by plane.