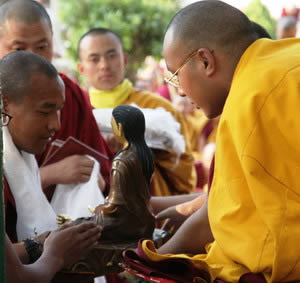 On the last day of the Kagyu Monlam Chenmo, His Holiness the Gyalwang Karmapa graciously offered a special set of fifteen-inch polished copper and gold statues of Marpa, Milarepa and Gampopa as a special gift to all the Kagyu Monasteries present at the Monlam. Creating models of lineage holders in the forms of such replicas is part of a long Kagyu tradition and provides an opportunity for followers of the lineage to inspire strong faith and devotion in their hearts. In addition to the attention to detail that went into creating the inspiring look-alike presence of these statues, they were filled and consecrated with the most sacred relic pills, including substances made from the personal relics of the three great ones.

Over the last two years, His Holiness Karmapa personally supervised the molding and crafting of the statues of the three Tibetan founders of the Kagyu lineage. His Holiness was meticulous in overseeing the production of statues to insure that they captured the spiritual likenesses of these Kagyu forefathers, and conducted extensive research to assure their authenticity and verity to tradition.

His Holiness personally presented each and every one of these statues to representatives of the Kagyu monasteries attending the Monlam, imparting his personal blessings and through him, the blessings of the lineage. His kindness in making these gifts reminded everyone of the great kindness of the lineage forefathers represented by the statues, and confirmed the sublime benefit of holding these lineage forefathers in one’s heart. – Karma Woser Rapten