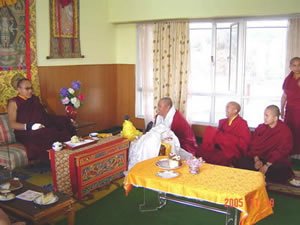 His Holiness also recently visited the Tibetan Children’s Village (TCV) Vegetarian school in Chauntra, named as such because all attendees of this school eat only vegetarian food. On his way, His Holiness passed through five welcome gates raised in his honor by Tibetan communities and monasteries in Bir, the Suja TCV School, the Sambota Tibetan School and Chauntra TCV School. A great number of monks, nuns, lay people and school children lined the road to welcome His Holiness and to get a precious glimpse of His presence.

His Holiness stopped at the Sambota Tibetan School, which is under the Central Tibetan Education Department. Mr. Kunchok, the headmaster, and the school band received His Holiness at the school gate. Students at the school stood in single file along the roadside. Besides hallowing the school campus, His Holiness offered special prayers in the School Prayer Hall.

His Holiness expressed his own happiness for being with the students, teachers and staff of the school on the first anniversary after coming from Patlikuhl. His Holiness also highlighted the importance of the current year i.e. 2005 being observed and celebrated as the year of paying our respects and expressing our gratitude to His Holiness the 14th Dalai Lama.

His Holiness Karmapa noted that there is no better advice than that given by His Holiness the Dalai Lama. The most important point is to cultivate unity among all Tibetans, to preserve one’s own culture and language, and to develop a non-sectarian outlook. We must pay equal respect and reverence to all traditions of Buddhism.

Speaking to the student’s experience of school, His Holiness urged students not to lose heart when a paper receives poor marks, or if an annual exam goes badly. One test does not measure the true potential of a student and so the student should remember that there is always a second chance, in school as well as in life, as long as you continue to put forth an effort to improve. His Holiness also addressed the teachers, asking them to be mindful of their influence on the children they teach, since a student’s mind is formed through their influence and is a child is especially receptive to everything the teacher communicates.

His Holiness toured different sections of the huge school campus, visiting the Special School for retarded children, the Girls’ Hostel and School Health Center and blessed the school grounds. The other highlights of visit was a cultural presentation from the school and the staff in the main auditorium, and a friendly football match exhibition between the students and staff of the school. His Holiness, as ever, also very much enjoyed the cultural and folk dance.

At the conclusion of the visit, Mr. Namdrol Tashi, the school headmaster, gratefully thanked His Holiness’s for his most kind visit to the school. His Holiness donated some seed money to the two schools he visited on this trip. – Karma Woser Rapten