Welcome to the Year of the Earth Mouse

7th February, 2008 is Tibetan New Year (Losar). The year is now 2135, the Earth Mouse year according to Tibetan Calendar. The Gyalwang Karmapa celebrated his Losar at Gyuto Ramoche Monastery in Dharamsala. In the morning of Losar, His Holiness presided over prayer at the main shrine hall. All the monks of Gyuto, the staff of Tsurphu Labrang and many devotees attended the prayer. Ceremonial sweet rice and Tibetan tea was offered by Gyuto Monastery to all who gathered here for the Losar Ceremony. Gyuto Khen-Rinpoche offered a mandala to His Holiness. The ceremony was concluded with the blessings from His Holiness to the assembly. Later, all the staff of Tsurphu Labrang had a private audience with His Holiness.

On Losar evening, His Eminence Tai Situ Rinpoche arrived at Gyuto Monastery to wish His Holiness ‘Tashi Delek’ for Losar and they had dinner together.

2 Feb, 2008. Dzigar Rinpoche had an audience with The Gyalwang Karmapa. Dzigar Choktrul Rinpoche is one of the lineage holder of Drukpa Kagyu. Rinpoche was recognized by His Holiness 16th Karmapa. 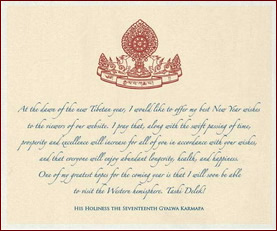 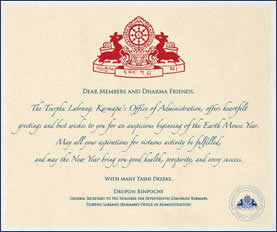 eCard from the Karmapa’s Office of Administration (view eCard)