5th January, 2008: Vajra Vidya Institute monks have been performing the Thrangu Tse-drup Puja (Thrangu Style of Long Life puja which was formed during the 14th Karmapa’s period) for the Gyalwang Karmapa from 3rd of January. On the last day of the Thrangu Tsedup Puja the Kyabje Khenchen Yongzin Thrangu Rinpoche offered the Ten-shug (Long Life) Mandala to the Gyalwang Karmapa. The ceremony took place in the main shrine hall of VVI which was filled with numerous international devotees and many Tibetans, mutually praying for Long Life of the Gyalwang Karmapa, for the benefit of all sentient beings. Later, Lama Dawa of Hong Kong Thrangu Dharma Center cordially invited the Gyalwang Karmapa for lunch at the Hotel Ramada in Varanasi. The entourage of His Holiness and the staff of VVI were also present at the lunch. 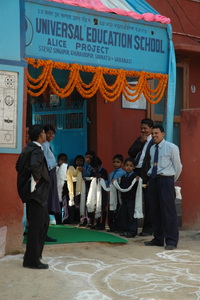