His Holiness at Vajra Vidhya in Sarnath (January, 2008)

5th January, 2008. Vajra Vidya Institute monks have been performing the Thrangu Tse-drup Puja (Thrangu Style of Long Life puja which was developed during the time of the 14th Karmapa) for the Gyalwang Karmapa from 3-5 January. On the last day of the Thrangu Tsedup Puja, the Kyabje Khenchen Yongzin Thrangu Rinpoche offered the Ten-shug (Long Life) Mandala to the Gyalwang Karmapa. The ceremony took place in the main shrine hall of VVI which was filled with numerous international devotees and many Tibetans, mutually praying for Long Life of the Gyalwang Karmapa, for the benefit of all sentient beings. 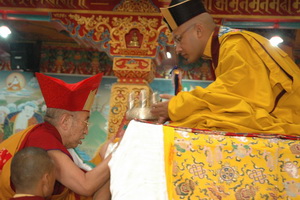 Ven. Khenchen Thrangu Rinpoche makes an offering to His Holiness at Vajra Vidhya in Sarnath on January 5, 2008

Later, Lama Dawa of Hong Kong Thrangu Dharma Center cordially invited the Gyalwang Karmapa for lunch at the Hotel Ramada in Varanasi. The entourage of His Holiness and the staff of VVI were also present at the lunch.

6th January, 2008: This is the 28th day according to Tibetan Lunar calendar. On this special day, the Gyalwang Karmapa released many bird and fishes in morning in what is called a “life release” ceremony. In the afternoon, the Gyalwang Karmapa gave the four armed Chen-re-zig Empowerment. Kyabje Thrangu Rinpoche was present.

The text for this empowerment was prepared by Jamgon Kongtrul Lodoe Thaye and published in his famous Rinchen Terzoed. The empowerment is also called the Great Compassion of Nga-ri (a place in western Tibet). After the empowerment His Holiness spoke about the practice the Buddha Amitabha, noting that in order to reborn in Buddha Amitabha’s pure land, one has to practice Avalokteshwara and Vajrapani for a quicker rebirth.

His Holiness also thanked Kyabje Thrangu Rinpoche for his hospitality, and mentioned that during the previous day of Ten-shug ceremony, Rinpoche requested that His Holiness “live 100 years” His Holiness replied that “when I think about it, I will not be able to live for that long by myself, so here I offer Ten-shug to you all friends for your continuous love and compassion.”