Language as the Link, Unity as the Future: The Gyalwang Karmapa Speaks at the 56th Anniversary of the Upper TCV 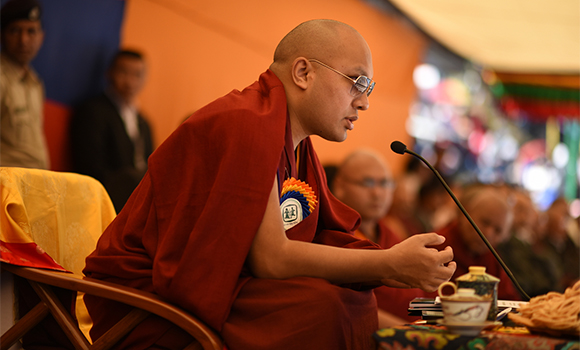 October 23, 2016 – Upper TCV, Dharamsala, India
On a bright sunny day, more than a thousand Tibetans gathered to celebrate the 56th anniversary of the Upper TCV Dharamsala. His Holiness Gyalwang Karmapa was invited as the chief guest for the opening ceremony of three days of events that would showcase Tibetan cultural performances, art exhibitions, debates, and an athletics meet. The theme of the celebration was the unity of the three provinces of Tibet, (Utsang, Kham, and Amdo), and how this can be strengthened through Tibetan spiritual values and culture.

Other distinguished guests included the Kalon (Minister) of the Department of Religion and Culture, Ven. Karma Gelek Yuthok, the Speaker of 16th Tibetan Parliament, Khenpo Sonam Tenphel, as well as members of the Kashag, many Secretaries and officials of Central Tibetan Administration (CTA,) and representatives of various NGOs. They sat in balcony seats by the playing fields where events took place while guests in festive dress filled the area and the surrounding hillside.

After greeting everyone, the Karmapa opened his talk by reminding the Tibetans that as the Tibetan people, they hold an ineluctable responsibility to sustain their inherited traditions and sciences. The Tibetan culture is the mind and life force of the people, he said, and the two cannot be separated. For those born in Tibet, the surrounding world of their family and neighbors, the snow mountains, plants, trees, monasteries and so forth, were the natural teachers of Tibetan culture, he explained, and so from childhood these Tibetans were filled with their imprints and experiences. Tibetan culture entered them as easily as taking a breath.

However, he continued, for more that fifty years, the circumstances in Tibet, its society and natural environment have undergone immense changes, and by necessity, the Tibetans were divided into two families. For those who had to leave Tibet and live in a different culture and environment, it became very difficult to sustain their culture and spiritual tradition. Nevertheless the Tibetans inside and outside Tibet kept their determination strong and made even greater efforts than before to keep alive their culture and religious tradition.

The Karmapa recalled that HH the Dalai Lama and the older generation of Tibetans had worked hard to provide a situation in which Tibetan culture and Buddhism could be practiced and preserved. For this, he said, we should consider ourselves most fortunate and feel great gratitude. The Karmapa then asked, “What is our present struggle? What is the difficulty that we must face? We must think about how, through becoming unified, we can survive and not lose our confidence or sense of purpose during these times of great change in the world that surrounds us.”

As followers Buddhism, the Karmapa also encouraged Tibetans to think beyond their own sphere and consider how to benefit others in the world at large. With this motivation, which transcends politics, they should engage in their work and responsibility. Of course, he noted, it is impossible to avoid all politics, but people can avoid the volatile arguments and the dregs of controversy politics can engender. The goals of politics and the leaders change often, but Tibetan Buddhism and culture remain over time, so it is important to maintain a sincere and virtuous frame of mind.

Further, the Karmapa added, it is important to change our way of thinking and focusing solely on our own situation. With humility Tibetans should think about how other refugees in the world and other minority nationalities sustain their lives and learn from them. “Since the population of Tibetans in India is diminishing,” the Karmapa cautioned, “in such difficult times, we must make plans, thinking long into the future and researching how the changes over the generations and in our surrounding environment will happen.” If we do not, then having been unable to adjust to the situation, in a few years Tibetans will simply be carried away by events.

Turning to the topic of the Buddhist teachings, the Karmapa asked, “What is the value of our customs?” “They are interlinked with Buddhism,” he replied. “Generally in Buddhism, we have the Kangyur and the Tengyur plus some 100,000 commentaries written by Tibetan masters,” he explained. “However, the most important point is that during this life of ours, we engage in practice and transform our way of thinking. We should turn ourselves into good people, create peace and happiness in our minds, expand our love and compassion, and come to understand philosophical views, such as interdependent arising and others, which are profound. All these are what is most precious and valuable.”

He then illustrated the pervasive influence of Buddhist thought on Tibetan culture: “In Tibetan poetry, songs, painting, plays, and other areas, we can always point to the essence of Buddhist teachings—we should have love, compassion, and respect for all living beings. And so when we are working, studying, or relaxing, we should not forget benefitting others. This is the value or defining trait of Tibetan culture.” And because of that value, the Karmapa commented, Tibetans should respect and hold precious their traditional culture.

The Karmapa noted in passing, “When they hear about customs and culture, many people think they imply a fixed and inflexible mindset. But sustaining our customs and culture does not mean promoting old ways of thinking or old-style brains. It is extremely important, necessary really, that we study to develop new thinking, new knowledge, and new abilities.” “If we learn new knowledge,” the Karmapa explained, “it will help our traditional culture to develop. The benefits and ability to sustain our culture will increase.”

Language is a key part in the process of preserving a culture. The Karmapa used an analogy to illustrate this. “If language deteriorates, our connection to our customs and culture will be severed. For example, when a kite soars in the sky, it is attached to a string, and if that string is cut, our link to the kite will terminate.” Language is the string that connects. Therefore, knowing these reasons and key points, he said, it is important that people make continuous efforts.

The Karmapa closed with heartfelt wishes for the long life of HH the Dalai Lama and the aspiration that the family of Tibetan people would gather together as one.[Best_Wordpress_Gallery id=”15″ gal_title=”Language as the Link, Unity as the Future”]