23rd February, 2008: His Holiness the Gyalwang Karmapa arrived at Mindrolling Monastery in Clement Town, Dehradhun, for the third week paranirvana puja of the His Holiness the XIth Mindrolling Trichen Jurme Kunzang Wangyal, Rinpoche, the head of the Nyigmapa Lineage of Tibetan Buddhism. Just before arriving at the monastery His Holiness was received by Khandro Rinpoche, Khorchen Rinpoche, Sakya Gya-yum Chenmo, welfare officer of Dickyiling Tibetan Settlement and representatives of monasteries and associations at the Ponta Sahib border of Uttranchal.

His Holiness was welcomed by all the Tibetan people of the Clement Town Tibetan camp, international devotees and the sanghas with their Serbang. On the arrival of His Holiness at the main monastery, Sang-yum Sonam Peldon offered a welcome Khata and later Body, Speech and Mind offerings were extended by Khandro Rinpoche, Khorchen Rinpoche and Poe-nam Tulku.

His Holiness the Gyalwang Karmapa will preside over the Gyawa Gyatso puja from 24th February. It will last for one week, in the Lhabab Choe-ten shrine hall of Mindrolling Monastery. More then 20 monks have specially come from Rumtek to assist His Holiness in performing the puja.

In the morning of 24th Feb, at 7:30 am His Holiness performed prayer at the Kudhung in the main shrine hall of Mindrolling Monastery, and later that day presided over the Gyawa Gyatso puja. 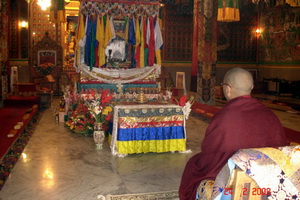 Upon arriving at Mindrolling Monastery, HH Karmapa paid his respects to the great
Nyingma hierarch by praying with the kudung of HH Mindroling Rinpoche