The Karmapa Tours Monasteries while in Dehradun after HH Mindrolling Ceremonies

27-28 February 2008. During the stay at Mindrolling monastery in Dehradun, numerous area monasteries requested the visit and blessing of the Gyalwang Karmapa. His Holiness visited the Dechen Choekhorling Monastery, which is of the Drukpa Kagyu Lineage, on 27 Feb. Ga Rinpoche offered Mandala to His Holiness. On 28th Feb, in the morning, His Holiness visited the Tashi-Kyil Gelug Monastery. Alak Rigdol Rinpoche received His Holiness and offered a Mandala. Later, The Gyalwang Karmapa visited the Drikung Kagyu’s Songtsen Library, where monks and nuns welcomed His Holiness with their Serbangs at the gate. Director of the Library Dr. Tashi Samphel give details about the Library and later visited Kagyu Nang-ten Tho-lop with His Holiness. The Library is situated near to the Dickyi-ling Tibetan settlement.

29 Feb 2008. The Gyalwang Karmapa gave the Amithayus Long Live empowerment (Tse-wang) from a text called Drub-gyal-ma, which originated from the lineage of Jetsun Rangjung-pa (one of the disciple of Milarepa). The Tsewang was requested by the chief representative of all the Tibetan settlement of Dheradhun. The staffs of the settlement, students and over ten thousand people gathered from all the Tibetan settlement of Dehradhun. His Holiness expressed to them his concern with the preservation of Tibetan Religion and Culture, and also spoke about the protection of environment and importance of trees for nature and our lives. The Karmapa appealled to the audience to plant more trees. The Tsw-wang concluded with the blessing from His Holiness individually. In the afternoon, His Holiness traveled to Rajpur to pay a courtesy visit and respects to His Holiness Sakya Trizin at his residence. Later in the day, His Holiness Karmapa and His Holiness Sakya Trizin had dinner together. 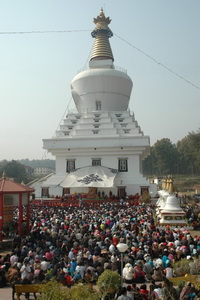