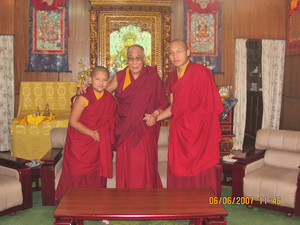 6 September, 2007. His Holiness accompanied by His Eminence Jamgon Kongtrul Rinpoche had an audience with His Holiness Dalai Lama at his residence in the morning at Tsuklag Khang Dharamsala.