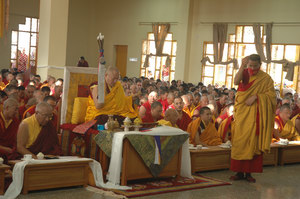 HE Goshir Gyaltsab Rinpoche at the Long Life Ceremony for HH Karmapa on September 26, 2007 in Dharamsala

26 September, 2007, His Eminences Situ Rinpoche, Gyaltsap Rinpoche, and Jamgon Rinpoche led a long life ceremony for HH Gyalwang Karmapa organized by the monasteries and monastic and lay sanghas of the Karma Kagyu lineage. The Tenshug commenced at 8 a.m with the arrival of His Holiness in the main shrine hall. Over two thousand people from far and near who gathered here for the Tenshug of His Holiness, including numerous representatives of monasteries and official bodies. After a tea ceremony, His Eminence Gyaltsab Rinpoche read the Tenshug letter of offering along with the presentation of eight auspicious signs. Later Kyabje Sangye Nyenpa Rinpoche read the praise with elaborate offering of the mandala to His Holiness.

After this was completed, the Tenshug Organizing Committee offered the body, speech and mind mandala offerings with attendant ritual offerings to His Holiness and to His Eminences consecutively. Tulkus and Lamas made their offering to His Holiness, followed by all participants. The ceremony of Tenshug completed with a hearty meal for everyone.

The September 26 ceremony was preceeded by a one week Tsedup, a ritual practice of Buddha Amitayus for the longevity of HH Gyalwang Karmapa. His Eminence Goshir Gyaltsab Rinpoche, with monks from Karma Kagyu monasteries, led the Tsedup. The Tsedup and Tenshug activities took place at Gyuto Tantric University in Dharamsala. Monasteries and sangha of the Karma Kagyu lineage are under the direction of the Tsurphu Labrang. – Tashi Paljor