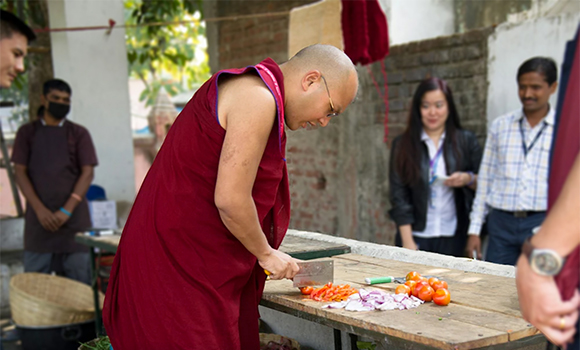 20 February, 2016 -All India Bikkhu Sangha and Shakya Muni College
On the day before the Monlam officially started, the Gyalwang Karmapa made time in his busy schedule to visit the Akong Tulku Memorial Soup Kitchen—even taking a few minutes to help chop vegetables. The soup kitchen operates during the Kagyu Monlam each year, and offers nutritious hot meals and kindness to hundreds of Bodhgaya residents. This year, in addition to serving lunch five days in Bodhgaya, the soup kitchen delivered food and supplies to three nearby villages.

The idea for the soup kitchen came about eleven years ago, when a group of Akong Tulku Rinpoche’s students from Samye Ling Monastery in Scotland came together to the Kagyu Monlam. Many in the group had never been to India, and they were saddened by the suffering they saw among the beggars and impoverished people in Bodhgaya. Vin Harris, who was present in that group and is now the director of the soup kitchen, said the group asked themselves: “What would Rinpoche do if he was here?”

For them the answer was clear—Akong Tulku Rinpoche would feed people. Rinpoche had made a commitment to help those suffering from extreme poverty and sickness after having nearly starved to death himself during his escape from Tibet in 1959. In addition to his many dharma activities, Rinpoche started the Rokpa Foundation and was involved in many other humanitarian projects before his death in 2013.

Having decided what to do, the group from Samye Ling started the next year by handing out dry food during one day of the Monlam. This continued for three years. Then, with the help of the Karmapa’s sister, Chamsing Ngodup Pelzom, the soup kitchen expanded and started cooking hot meals. At that point, Akong Rinpoche told those organizing the soup kitchen that it would be wonderful to be able to offer medicine as well. Lama Choedrak, the director of Kagyu Monlam, helped fulfill Rinpoche’s wish by suggesting the soup kitchen work with the existing medical camp. Now, the medical camp and soup kitchen operate across the street from one another, providing food and medical care in tandem. They have also partnered this year to visit and offer help to local villages.

Another critical part of the soup kitchen—the food—is organized and cooked by Tergar Monastery. The Tergar catering manager, Lama Tenzin, is in charge of ordering all the food and managing the preparation. This year, six or seven cooks from Tergar came each day of the soup kitchen to prepare and cook high quality meals for up to 500 people. They did this using a small temporary kitchen set up next to the lawn where people sit to enjoy their meal.

Other organizations that also support the soup kitchen are the Kagyu Monlam, Tsurphu Labrang, and the Rokpa Foundation.

Many volunteers from across the world also show up each day to help serve the food. Harris told me he has never needed to make a schedule for volunteers, he simply trusts they will come. “I never plan,” he said. “People who are meant to hear about it just come and help.” He told me they usually have between 5-15 volunteers show up each day. These volunteers come from around the world. This year, Harris said he met volunteers from South Africa, Scotland, Hong Kong, Taiwan, Canada, the United States, Malaysia, England, Germany, France, and Sikkim.

“One of the best things about this project is the way it brings people together,” Harris said. “Normally at the Monlam people from different countries tend to stick together in groups and it can be hard to meet people. But here, when people come to help they form an instant community.”

The trips to nearby villages added yet another layer of interdependence and activity to the soup kitchen this year. In a fitting way, one of these villages includes Sujata, where the ascetic Buddha was offered milk-rice shortly before attaining enlightenment.

In partnership with the medical camp, the soup kitchen contacted leaders of three local villages, and asked them what the people in their communities needed. In addition to food and medicine, they learned that the schools need books and sports equipment, and that there is also a need for clean water. So along with food and medical care, the groups brought footballs and books to schools. They also installed a new water purification system at one school. Harris said he hopes that these offerings will be able to bring longer-term benefit to people.

One of the things Harris said he felt is most important for him is remembering the teachings of Akong Tulku Rinpoche, and putting them into action. One of the teachings Harris recalled receiving from Rinpoche is that in serving and receiving food, there is no high or low. “In Rinpoche’s own experience, he knew it makes no difference if you are a tulku or a beggar—you need food,” Harris said. The soup kitchen aims to put this teaching into practice by teaching their volunteers to look each person they serve in the eye, and to treat them with love and respect.

“We’re not going to solve the problems of India,” said Harris. “But if the people we serve are met with kindness at least once, that is what’s really important.”