Songs of the Kagyu Fathers: A Special Ganachakra Blessing 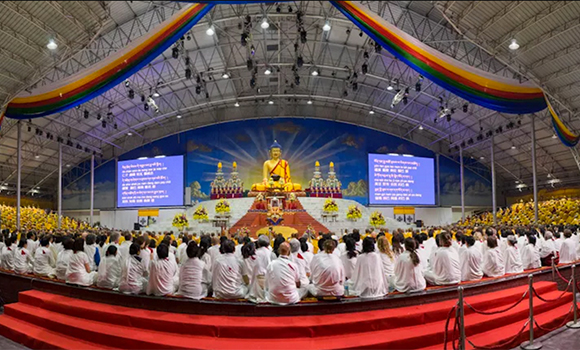 17 February, 2016 -Monlam Pavilion, Bodhgaya
Every three years HH the 17th Karmapa offers a reward to those who have completed the 400,000 long ngondro or traditional foundation practices: refuge recitations and prostrations, the Vajrasattva 100 syllable mantra of purification, the Mandala offering of the universe and Guru Yoga. Each of these practices prepares the ground for receiving advanced yidam practices and Mahamudra on the Vajrayana path. Refuge and prostrations to the Mahamudra lineage focuses the mind on the Kagyu lineage masters; recitation of the Vajrasattva mantra cleanses negativity; the Mandala offering accumulates merit; and through Guru Yoga we receive the blessings of the lineage through the three gates of body, speech and mind.

At 7 pm the Karmapa walked in casually and re-arranged the 1000 international practitioners who gathered in the Pavilion. He called everyone onto the stage, and as if by prior arrangement, there was indeed exactly the right number of people to sit in each space. Nuns and monks in robes, and laypeople in white each received a white shawl with a red triangle sewn into the upper centre back, symbolizing our profound connection with the lineage of Milarepa, who wore only a cotton cloth and practised tumo in the freezing Tibetan winters. With two nuns from Bhutan and Nepal as Umdze or chant masters we all sang the Songs of Realization of the Kagyu masters from The Rain of Wisdom. At a certain point the Karmapa joined the Umdzes and the union of male and female voices, powerful and clear, led the assembly into the essence of devotion, with the Karmapa as lineage father supporting his family.

After the ganachakra ritual, we received a delicious concoction which we were told to eat completely on the spot without leaving any remainder. As the ritual closed the Karmapa announced, without any kind of fanfare, that he had received some pills containing the 16th Karmapa’s blood which he would like to hand to us. These were not to eat he said, but to keep with us. The blood had the meaning of both a family connection and the heart blood of essential instructions given to intimate disciples. He moved deftly up and down the aisles handing a packet to each person until 11 pm, without showing the slightest sign of fatigue. Similarly we emerged into the quiet darkness energised and blessed by the lineage father in body, speech and mind.