The Soup Kitchen at the 32nd Kagyu Monlam 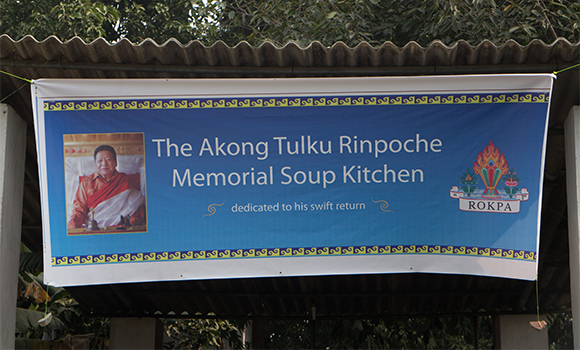 When arriving in Bodhgaya for the Kagyu Monlam, it is impossible not to be moved by the difficult life circumstances of the local people. This is particularly so for those of us who come from countries where health and well-being are more or less taken for granted. Even though we may wish to do something to alleviate the suffering we see all around us, it is difficult to know where to start and what might be the most effective way to help.

His Holiness the 17th Gyalwang Karmapa has expressed his wish that we should not simply be content to feel compassion when we are making prayers but we should begin to find ways to actually put compassion into action. Following this guidance, projects that embrace this vision are now becoming an intrinsic part of the activity of the Kagyu Monlam.

For the last 10 years, students of the late Akong Tulku Rinpoche have been giving food to local people during the Kagyu Monlam. This started with small scale projects based at the Mahayana Hotel with the kind support of Trinley the manager there. Later on they helped the Gyalwang Karmapa’s sister to organise a food camp at the Kalachakra Ground which offered food to over 800 people a day as part of her wish to support His Holiness’s long life and activity. More recently, at the suggestion of Lama Chodrak, the Soup Kitchen has worked in partnership with the Monlam Medical Camp and this partnership continues to flourish with even more ambitious plans envisaged for future Kagyu Monlams.

The wisdom and compassion of His Holiness Gyalwang Karmapa and the great Kagyu Lamas who support his activity through their devotion to Him create remarkable opportunities for ordinary beings to benefit themselves and others.

Over the years working at the Monlam Soup Kitchen so many volunteers from all over the world have worked together joyfully to serve others and found that expressing their own natural kindness by putting compassion into action has brought blessings and connection to others that we could not have envisaged. Of course the life of those whom we have served remains unimaginably difficult; but just because we cannot solve all of their problems does not mean that offering food and kindness is a waste of time. In the simple act of giving, if only for a brief moment, something shifts as people who are accustomed to experiencing rejection and unsatisfied wanting are able to receive acceptance, respect and the satisfaction of eating good hot food. This in itself feels worthwhile and who knows what seeds have been planted.

This year the Soup Kitchen supported the medical team by giving fruit and healthy snacks when we travelled to surrounding villages for 2 days. After that, for 5 days we have served around 500 hot meals and fruit every lunchtime to those attending the general Medical Camp as well as to others (including cycle rickshaw drivers and the local snake charmer!) who benefitted from good quality rice, dahl and vegetables all cooked by the wonderful Tergar kitchen team. For the final 3 days of the Monlam we will support the specialist medical team from Max India Foundation as a new partnership begins which we hope will develop further the aspiration to provide well-being for all.

When Akong Rinpoche was escaping from Tibet he almost died of starvation and at that time he made a promise that if he survived, he would always do whatever he could to make sure that no-one was hungry. The Soup Kitchens that he established in various countries always followed the same principles: to offer food to anyone who asks, to give with kindness and compassion, to treat others as equals and to give without any expectations. He was never able to attend the International Kagyu Monlam. However, on the 3rd January 2015, His Holiness Gyalwang Karmapa found time in his busy schedule to visit the Soup Kitchen, which this year has been dedicated to the swift return of Akong Tulku Rinpoche.