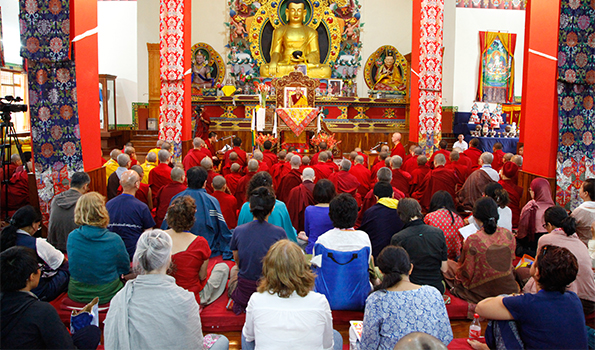 The Gyalwang Karmapa arrived at Drubten Pemo Jalpay Gatsal, 40 kilometers from Gyuto monastery, a new nunnery set among fields of wheat and flowering trees in the foothills of the Himalayas for a three day visit. The nearby Karma Drubgyu Thargay Ling is one of the oldest Kagyu nunnery outside of Tibet and has grown to such a size that new facilities were created to accommodate the large number of female practitioners. Great efforts have been made to give nuns a place to practice the dharma, hear the instructions and do the trainings; that they have these wonderful opportunities – where they may not have in the past – is a sign that the teachings of the Buddha are flourishing.

On his arrival, he first consecrated the new Mahakala shrine room set above the temple. After the welcoming ceremony with offerings of ceremonial tea and rice, the Karmapa then presided over a Mahakala puja for the nuns and other international students as well.

The teaching requested on the 2nd day was the Four Common Practices of Mahamudra, also known as the Four Thoughts that Turn the Mind. The Karmapa noted that these teachings came from the great master Gampopa, who taught Mahamudra from the lineage of Marpa and Milarepa, but that the preliminaries came from the Kadampa of Atisha. The Four Thoughts that Turn the Mind are the appreciation of our precious human life, the realization of death and impermanence, the recognition of the defects of samsara, and the cause and effect of karma.

We must be thankful for the leisure and resources we have to practice the dharma and put our meditation practice and studies to use in our day-to-day lives. No matter how much practice or how many rituals we do, if we do not make an active attempt to change our mind-stream and consciously practice kindness and compassion, then our afflictions will not decrease. Some people do not look at their own faults and afflictions, but only the thoughts and afflictions of others. This develops pride and arrogance and shows that the dharma is being practiced incorrectly.

If we wish to have dharma make an impact on our mind-streams, what should we do? The Karmapa says we must make efforts with strong determination to replace thoughts of anger with thoughts of compassion and virtue. It can be difficult, because when an affliction like anger arises, it feels as though there is no distance between ourselves and our anger. It can take over 100% of our mind, so we must make an effort to view these afflictions objectively rather than subjectively and we do this by practicing the Four Thoughts.

On the third day the Karmapa gave the Vajrasattva Initiation from Marpa. He offered the profound advice to make confessions for any misdeeds you may have done – not only for yourself – but for others as well. Vajrasattva practice is taught to be the most effective practice for purifying misdeeds. With regret and regard to future thoughts and actions, one can dedicate merit so that all sentient beings may reach Buddhahood.

The final day ended with a debate, as the nuns had the opportunity to demonstrate the value of their traditional Buddhist education. Enthusiastic claps rang through the air as they made their points on the finer aspects of dharma. As the Karmapa left at the end of the visit, the participants felt his powerful presence and were grateful for the opportunity to receive his teachings and blessings.