(December 8, Bodhgaya) For the final session of the Karmapa 900 Opening Ceremony’s first day, the focus was firmly on the First Karmapa, Dusum Khyenpa, with three hours of Dusum Khyenpa Guru Yoga practice. His Holiness himself especially compiled the text used for the session, entitled Streaming Shower of Blessings. The blessings were showering indeed, as His Holiness the Seventeenth Karmapa, His Eminences Gyaltsab Rinpoche and Jamgön Kongtrul Rinpoche and other Karma Kagyu lineage holders led a gathering of bhikshus, bhikshunis and yogis of the Karma Kagyu lineage in a palpably powerful evening of intense practice.

Admission to the evening activity was open only to fully ordained monks and nuns and to those who have completed a three-year retreat. As their admission ‘ticket,’ those who qualified received a full-color photo of Dusum Khyenpa from the lineage thangka series from Palpung Monastery in Tibet. During the session, the assembly hall was a sea of saffron monastic robes ringed by lay practitioners, many in white cotton. The portico surrounding Tergar Monastery’s main hall was filled with members of the general public content to listen and watch from outside—and the energy that filled the hall no doubt penetrated the walls to reach them outdoors as well.

The evening began with an oral transmission of the practice text. The Gyalwang Karmapa explained that the text was largely a compilation of other practice texts, including compositions by the four regents of the Karma Kagyu lineage. His Holiness requested the two regent lineage masters attending the session—His Eminence Goshir Gyaltsab Rinpoche and His Eminence Jamgön Kongtrul Rinpoche—to confer the oral transmissions for the prayers that had been composed in their previous incarnations. The Gyalwang Karmapa himself conferred the oral transmission of the remaining portions of the text.

As tsog was distributed to the assembly, His Holiness joyfully urged all not to be bashful but to eat their fill, and not to set their cups on the ground but to enjoy the tea steaming hot and straightaway. Along with more traditional fare, the food distributed included a huge layer cake, frosted like a birthday cake. Because Dusum Khyenpa was the first being in history to intentionally reincarnated, thus founding the Tibetan institution of reincarnate lamas, this was likely the world’s first cake for a 900th birthday celebration. In this way, the tsog served as a sweet reminder of the extraordinary qualities of the Karmapa lineage, sustained today by the exceptional being leading the evening’s gathering: His Holiness the Seventeenth Karmapa, Ogyen Trinley Dorje. 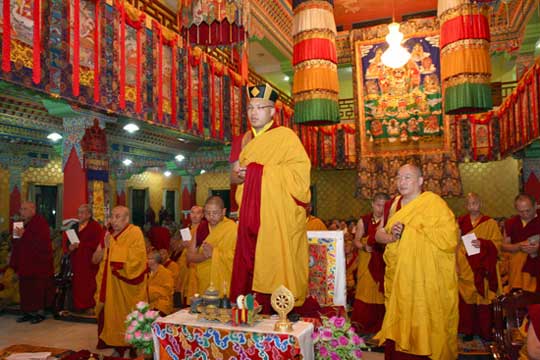 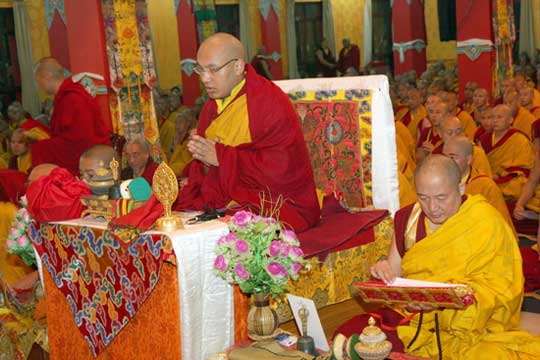 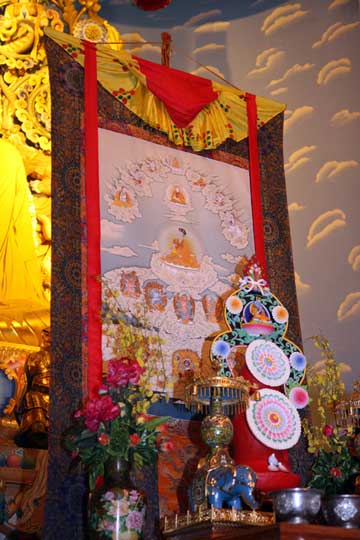