A Rain of Blessings: the Anniversary of Dusum Khyenpa’s Parinirvana 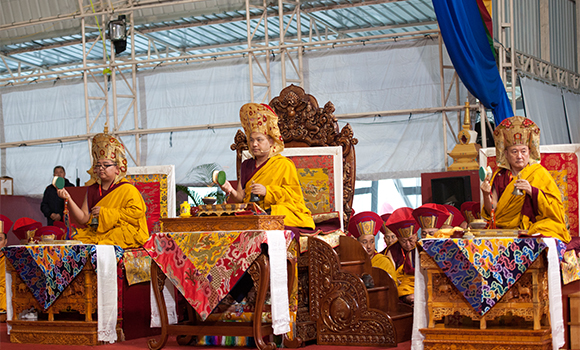 December 24, 2014 Monlam Pavilion, Bodhgaya
In the chill of the late afternoon, the Pavilion is surrounded by the warm light of candles, tracing the edges of the roof above, and below, the curving lines of the walls around the offering hearths. Across the fields, the walls of the main shrine and the Karmapa’s quarters are aglow, draped in the flowing lines of bright lights, remindful, too, of the Christmas Eve that is being celebrated in other parts of the world.

Inside the Pavilion, the magnificent throne is now occupied by a life-like statue of Dusum Khyenpa, his eyebrows slightly raised as his eyes gaze downward in meditative concentration. The Gyalwang Karmapa’s carved throne of a warm brown wood has been placed on the right side of the stage in between lower thrones for his heart sons Jamgön Kongtrul Rinpoche and Gyaltsap Rinpoche.

A Rain of Blessings,the Dusum Khyenpa celebratory puja to be chanted this evening, was written by the present Karmapa for the 900th anniversary of Dusum Khyenpa in 2010. The text is now displayed in clear, colorful letters (Tibetan, roman transliteration, and Chinese) on the new high tech screens placed on either side of the hall. The verses are full of poetic  beauty and depth. In speaking of Dusum Khyenpa, the Karmapa writes:

All-pervading lord, you are the nature of all things;

Like space, you do not stay, you neither come nor do you go,

Knowing neither motion nor stillness yet appearing

Wherever we looklike the moon shining in water.

This sadhana of Dusum Khyenpa is supplemented with compositions by the four heart sons, which were interleaved throughout the practice today. As the Karmapa notes with humility in the colophon: “I used the words of earlier masters, leaving them as they were, and then decorated them with supplementary texts that are the unchanging words of the heart sons.”The Karmapa also wrote: “I dedicate this virtue so that all my parents, living and deceased,may move along the path going from happiness to happiness, and that this be a cause for them to be cared for by the noble Three Jewels and the lord of Dharma, the glorious Karmapa.”

As part of the celebration, delicious rice cooked with apricots and dates was offered to the thousands present. And at the end of the puja, the Karmapa stood in front of the throne where the statue of Dusum Khyenpa was seated and offered beautiful bronze statues of the First Karmapa to the Administrations of Tai Situ, Jamgön Kongtrul, and Gyaltsap Rinpoches; to the Tsurphu Office; the Kagyu Monlam Organizing Committee; Mingyur Rinpoche’s Tergar Labrang; to Khenpo Lodro Dönyö for his connection to all the work Kalu Rinpoche did for the Monlam; to the Taiwanese master teacher Hai Tao Fa Shih of Life TV; and to Gyatson Rinpoche who has committed to be the main sponsor of Monlam for five years. At the very end before leaving the stage, the Karmapa wished everyone a Merry Christmas.