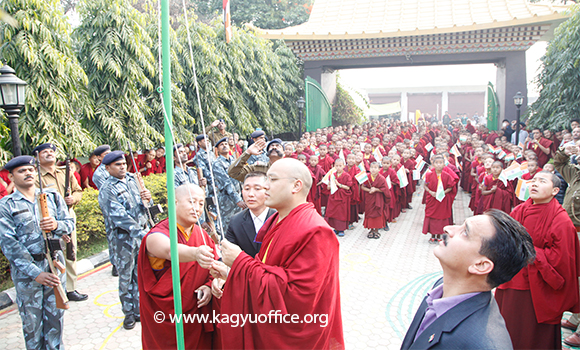 26 January, 2015 – Tergar Monastery, Bodhgaya
In what has become an annual event during his winter programme, the Gyalwang Karmapa joined in the flag-raising ceremony to celebrate Indian Republic Day.

More than a hundred young monks with their teachers lined up in straight lines on the patio outside the Tergar Monastery shrine hall, and stood smartly to attention, below the flagstaff. Members of the regular police force in their knife-crease, pressed khaki uniforms and the paramilitary protection squad in blue-and-grey camouflage stood to attention beside them. As one, they presented arms with their automatic rifles or saluted, while the Indian national flag was raised. Emblazoned with the Buddhist Emperor Ashoka’s 24-spoke chakra wheel in navy blue, the tricoloured flag —with saffron, green and white panels— has become the symbol of modern, democratic India.

Also present at the ceremony were members of His Holiness’ Tsurphu Labrang staff and Tibetan security personnel, most of whom are either serving soldiers on secondment to security duties or ex-soldiers. Many monks, nuns and foreign visitors clustered round and joined in too.

The Gyalwang Karmapa has often spoken of the debt the Tibetans owe the Noble Land of India, being both the birthplace of Buddhism and a place of refuge or His Holiness the Dalai Lama and the Tibetan people. He watched with deep respect as the flag rose high until its colours caught the morning sun.

The young monks sang the National Anthem and chanted Buddhist prayers for the happiness and well-being of the world and all sentient beings. Then they enthusiastically waved small national flags before feasting on celebratory Indian sweets.

Immediately afterwards the Gyalwang Karmapa received the Indian security personnel upstairs in his audience room and presented each of them with Indian sweets as gratitude.